In November 2018, Cameron Bellamy completed the first ever solo circumnavigation swim of Barbados, a 90km journey that took 40 hours 46 minutes to complete. Already an Oceans Seven swimmer, he quickly set about finding the next big swim, and settled on Cuba to Florida. Unfortunately, he was unable to secure the necessary permissions and, having done the training, identified a new and unique challenge: swimming from Barbados to St Lucia – a distance of 151km.

Setting off from the west coast of Barbados at 8:20 in the morning of Friday 13 September, Cameron wouldn’t touch land, or a boat, for 56 hours and 26 minutes.

Speaking after the swim (once the swelling and pain from his severe salt mouth had diminished sufficiently), he said: “The toughest part for me was the second day leading up to the middle part of the swim. There was absolutely no wind, the air temperature must have been in the mid-30s and water temp around 30 degrees. I was feeling dizzy and weak and, if it wasn’t for the encouragement of my amazing support crew, I think I might not have made it further. Once I had St Lucia in my sights, after swimming through the second night, I knew I could make it and pushed myself further than I could ever have imagined.”

He nearly didn’t make it. For the final mile, he had to fight a strong adverse south-moving current and struggled with the last of his strength to touch the shore. After he finished, he was only semi-conscious and unable to walk or talk. He was eventually taken by speed boat to Tapion Hospital for treatment for severe muscle breakdown and toxicity of his blood, swelling of the mouth and sunburn.

Cameron dedicates all his endurance sport activities to tackling inequalities, especially in education, in his home country of South Africa, and in Zimbabwe and the Caribbean. In 2011, he created an educational charity, the Ubunye Challenge, that focuses on Early Childhood Development in rural areas in these countries.

Find out more and support the Ubunye Challenge at ubunye.web.app 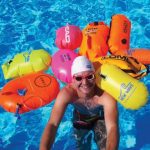 What is a tow float? – and why you need one