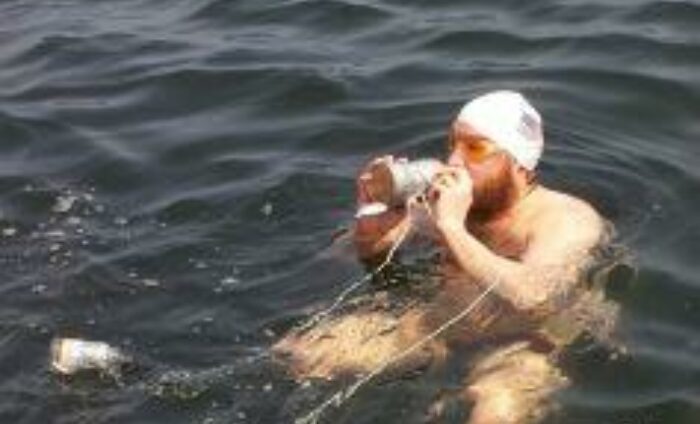 The Farallon Islands (or the Farallones) lie off the coast of San Francisco, 30 miles from the Golden Gate Bridge. Apart from a research station the islands are uninhabited, remote and desolate. The seas around the islands are notorious hunting grounds for great white sharks. Often shrouded in fog, the sea is cold and the currents and weather unpredictable. They make, therefore, a perfect setting for audacious marathon swims.

Until 8 April this year only two people had completed the swim from the islands to the mainland. Stewart Evans and Ted Erikson both succeeded in 1967. In 2014, Craig Lenning, a 34-year old from Denver, Colorado, became the third.
His swim started in the water at Fisherman Bay on the northwest corner of South Farallon Island about half an hour before sunrise. The sea temperature was 12.2 degrees Celsius and the air a little cooler. Setting foot on the islands is prohibited as they are a protected National Marine Sanctuary so the swim starts from a small buoy, 150m from the shore. The swim was observed by Marathon Swimmers Forum founder, Evan Morrison, and crewed by adventure swimmer Jamie Patrick.

In his observer’s report, Morrison wrote:

“Conditions were considered quite favourable for swimming, given the notoriously volatile marine weather common to the area. Winds ranged from 5 knots at the islands in early morning, to 8-10 knots mid-channel in the early afternoon, to 3-5 knots in the evening near the coast. Medium-period swells of 4-5 feet rolled through from the Northwest, moderating to 2-3 feet in late afternoon. Water temperature increased gradually throughout the day, from 54F at the islands to 57F at the 6-mile buoy (46237), then back down to 55F as we approached the Marin coast. Fog at the islands gave way to partial sun and a clear view of the mainland, before the fog descended again in the evening.
“Craig remained in seemingly good spirits throughout the swim. Though he became increasingly physically exhausted near the end, he never displayed any sign of hypothermia or mental incoherence.”

The original plan had been to swim to the Golden Gate Bridge but it became apparent that the hoped-for assistance from the tide hadn’t fully materialised so the team decided to aim for the mainland at Muir Beach, the same route Stewart Evans had completed 47 years earlier. After 15 hours 47 minutes and 22 seconds of swimming Lenning cleared water, guided to the beach through thick fog by a torch-wielding Muir Beach firefighter who’d been watching the swim.
Picture © Evan Morrison