It was a double victory for Brazil yesterday as Ana Marcela Cunha and Allan do Carmo both took gold in the penultimate race of the FINA/HOSA 10km Marathon Swimming World Cup, which took place in Chun’an, China.

In the men’s race Allan do Carmo touched first in 1:53:04. The podium was completed by Richard Weinberger (Canada) in 1:53:08 and Esteban Enderica (Ecuador) in 1:53:09. The win in China is do Carmo’s first World Cup gold medal this year, after placing second in Viedma and Lac Megantic. Series leader Christian Reichert just missed out on a podium place, finishing equal fourth with Diogo Villarinho in 1:53:12.
In the women’s race Cunha claimed her second win of the season in 2:03:36. Samantha Arevalo (Ecuador) was second in 2:03:39 and Cecilia Biagioli (Argentina) completed the podium with a time of 2:03:39. Series leader Rachele Bruni was joint seventh in 2:03:52.
Fifty-four swimmers (28 men and 26 women) competed in China on Sunday. The final leg of the World Cup will take place in Hong Kong on 17 October.
See also:
Payne and do Carmo win in Rio 2016 test 10km event
From Russia with love: Ruffini takes gold in 25km at Kazan then proposes to girlfriend 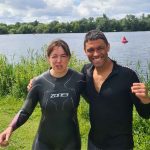 Racing the tide: an epic 62-mile swim around the Isle of Wight

New Poole Ocean Swim to include “how far can you swim in 90 minutes challenge?”