Peterson’s victory in 1:57:37 follows his wins at Setubal and in the Pan American Games. Jennings’ winning time was 2:09:15. It was her first victory of the season after four races.
In the men’s race, Rhys Mainstone (Australia) was second in 1:59:21 and Nicolas Masse-Savard (Canada) third in 1:59:30. In the women’s race, Anna Mankevick (Russia) and Gabrielle Soucisse (Canada) joined Jennings om the podium.
20 elite swimmers from 12 nations (14 men and six women) took part in the competition. 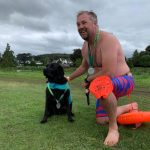