Ed completed the crossing in 3hrs 51mins on 24 April and in doing so gained entry to the select group of swimmers who have been able to complete this iconic 8.8-mile swim in less than four hours.

The swim was not without incident. As well as having to deal with colder than expected water (15 degrees Celsius rather than the normal 18 degrees for April), Ed also had a run-in with a 100,000-ton supertanker. The Gibraltar Strait is one of the busiest shipping lanes in the world, but most tankers changed course to avoid Ed. One tanker, however, refused and came within 25m of him – sending up huge waves, massive swells and churning up even colder water from the depths. “It was a very near miss with that particular boat but to get that close to such a massive vessel was pretty amazing!” said Ed.
As well as being accompanied by supertankers, Ed had more welcome company in the form of a pod of bottlenosed dolphins. “Swimming with dolphins in their natural habitat was one of the most amazing experiences of my life,” said Ed. “They were swimming under me close enough to touch and I could hear them clicking and talking to each other. It is experiences like this which makes ocean swimming so addictive for me.”
Ed took on the Gibraltar Strait in preparation for his next Oceans Seven swim later this year, when he will return to swim the North Channel between Ireland and Scotland. This 22-mile stretch of water is considered the hardest channel swim in the world due to the extreme cold, ruthless currents and toxic jellyfish. Ed attempted it last year but 20 miles in got pulled out due to taking hundreds of jellyfish stings to the face and torso which resulted in respiratory failure due to an extreme build up of toxins in his system.
“This Gibralter Strait swim was harder for me than it probably should have been, which shows that I need to train harder for my return to the Irish Channel in July,” said Ed. “Physically I was fine but mentally I just wanted the swim to be over which considering my next expedition will last three times as long, I need to get on top of. I am still very happy with my time.”
See also: I’ll be back 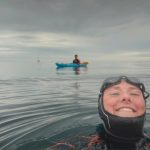