The junior team will race over distances from 3km to 7.5km in Lake Maggiore at the event from 10-12 July.
The team includes Alice Dearing, who will also represent Great Britain at the World Championships in Kazan later in July following a strong performance at the Great North Swim, where she finished second in the 5km event.
British Swimming Marathon Swimming Lead Bernie Dietzig said: “Lake Windermere was our selection race for this competition. Under challenging conditions eight swimmers qualified for the youth and junior spots and two swimmers were selected via wild card.”
The team also includes reigning ASA National Open Water champion Nathan Hughes and Holly Hibbott, who won gold in the 800m freestyle at the European Games.
“Seven out of the ten swimmers who qualified have come straight off the England Programmes/British Swimming Marathon Swimming Camp in Majorca where they spent a week pool training and racing,” said Dietzig. “Having had the opportunity to observe the racing skills from a number of the athletes who made it on the team during the camp in Majorca and the selection race in Lake Windermere I am confident that our swimmers are race ready and capable of delivering results.”
The full team list is: Samuel Budd, Cameron Croot, Nathan Hughes, Thomas Millburn, Tim Shuttleworth, Alice Dearing, Sophie Evans, Rose Foden, Holly Hibbott and Philippa Shuttleworth. 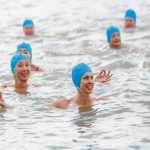