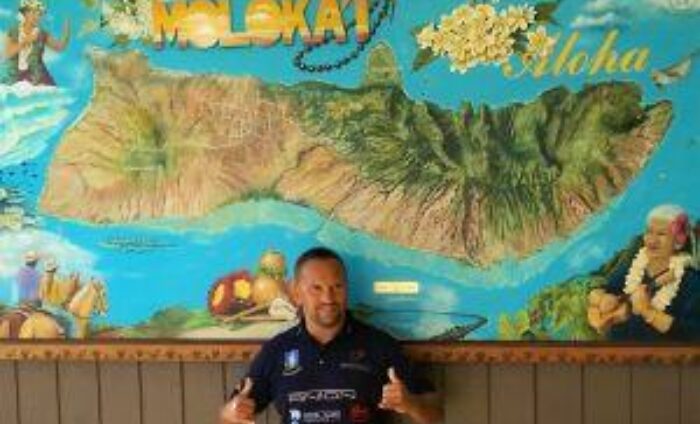 Hungarian marathon swimmer Attila Mányoki set a new record for the Molokai Channel in Hawaii while swimming in tough conditions at the end of September. Twelve days later, while still fatigued, he crossed the Catalina Channel, again in adverse conditions.

Mányoki, who in 2013 was the Channel Swimming Association’s fastest male swimmer across the English Channel in a time of 10hr 47, previously raced on FINA’s marathon swimming circuit. In 2014 he set the third fastest time ever (7hr 29) to cross the Tsugaru Channel in Japan. The potential was always there to set a record for Molokai, but fast times are never guaranteed in open water swimming.
The day of the swim (21 September) started well.
“We arrived around 5pm to the starting point. At 6pm I started to swim across the Molokai channel. For about 45 minutes it was easy but then I arrived in swimmer’s hell! I swam all night long and the conditions were very very rough! We had fierce currents, strong winds (40-50km/h) and 10ft waves. Not only was swimming hard, in conditions like this it was difficult to feed.”
Because of the current, Mányoki ended up swimming parallel to the shore to an alternative finishing point 5km away from where he’d planned to land. He eventually finished at Makapu’u, the first person to use this landing point. Despite the unusual finish point and the tough conditions, Mányoki’s time of 12hr 2 was a new record for the crossing, beating Penny Palfrey’s time by a mere five minutes.
A few days later, Mányoki headed to California.
“I felt so tired and had many questions before my swim in Catalina. Molokai had cost me so much effort and energy I didn’t know how I could recover in such a short time between the swims. Also, in Hawaii, the sea was warm at 28 degrees, and Catalina would be much cooler.”
Mányoki started his Catalina swim at 0:29 on 5 October. The day before had seen unprecedented heavy rain in the area and this resulted in an adverse current and, again, strong winds. With his body fatigued and conditions against him, there was no chance of a second record. Simply finishing was already in doubt.
“The entire swim was against the current and the wind was blowing from a different direction, which made the ocean very choppy. It was a really, really hard swim! I was fine and I felt okay until the final three hours. The last two were truly terrible. It was a huge mental battle to finish, but I eventually reached shore in 10hr 59.”
With four of the Oceans Seven swims now completed, Mányoki has set his sights on possibly the hardest, the notorious North Channel, with a window booked in August 2016.