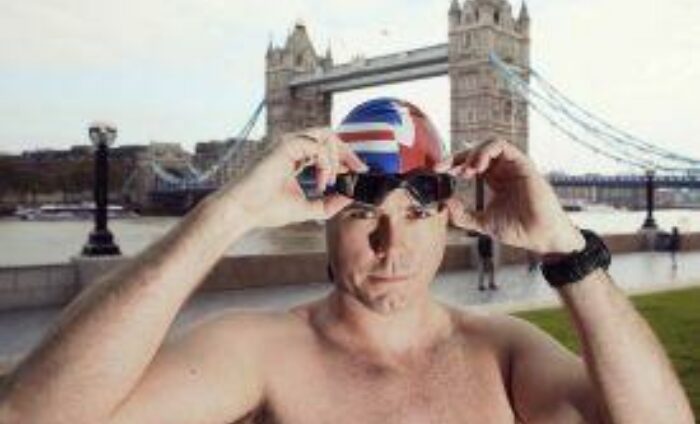 In 2007 Michael Ventre attempted to swim the English Channel. After 13 hours of swimming he was making no headway against the tide and was pulled out of the water in sight of the French coast. He wasn’t disheartened: after all, 13 hours of swimming is still a huge achievement. And that experience taught him something: he had endurance. In the words of Dory in Finding Nemo, he could “just keep swimming.” In 2011, on his third attempt, he successfully crossed the Channel.

With the Channel under his belt Michael went on to swim two more Oceans Seven crossings: Molokai and Catalina. But that wasn’t quite enough. He wanted an extreme challenge, a swim that had never been attempted before.
“I began Googling the world’s longest swims,” says Michael. “That’s when I came up with the idea of swimming from New York to London as it hadn’t been done before.”
Starting in the Hudson River in New York, Michael will swim 3,800 miles across the Atlantic and then up the Thames to finish in central London. That’s the equivalent of swimming the length of Great Britain almost four-and-a-half times. As well as jellyfish and extreme weather, Michael could also encounter sharks and killer whales.
It’s a big dream for someone who was born in landlocked Botswana and didn’t see the ocean until he was three years old. But Michael had dreamed of impossible distances since he was ten years old and watched Thomas Gregory on TV become the youngest person to swim the English Channel in 1988.
The New York to London swim is scheduled to start in April 2017, and Michael estimates that it will take between five to eight months. Before that though he needs to secure funding to get him to the start line.
We caught up with Michael to discuss his plans.

What inspired you to undertake such an extreme challenge?
I attempted the English Channel in 2007 but was unsuccessful in making it all the way to France, having got caught in the dreaded tide just off the French coast. But I managed to still swim for 13 hours before being told to get back on the support boat. I wasn’t disheartened because 13 hours was a huge achievement for me at that time. A couple days later I realised that my endurance was not an issue and that I could swim all day long if need be. So I began Googling the world’s longest swims. That’s when I came up with the idea of swimming from New York to London as it hadn’t been done before.
What responses do you get from people when you tell them about the swim?
“You are nuts!” and “You know you can fly with BA in just six hours!”
How will you prepare yourself physically? What does your training schedule look like?
At the moment I work full time in IT so I train when possible, on average 90 minutes each weekday evening (indoor swimming). On the weekends I may head to the coast and rack up the mileage with six-hour continuous stints at Swimmers’ Beach in Dover.
As well as the physical rigours of swimming every day for five to eight months, it is going to be pretty tough mentally. What are your coping strategies and are you also training yourself psychologically?
I will have broadband onboard so I will be in regular contact with friends and family over the internet. I will also be employing a sports psychologist so I will be able to have regular Skype sessions on the boat while resting in the evenings.
How will your daily swimming schedule work?
I will swim for six to eight hours every day, with breaks for lunch, dinner and rest. When not in the Gulf Stream I should cover between 14 and 18 miles a day, but the Gulf Stream could push that distance up to 20 to 40 miles a day. I will sleep on the support boat and a GPS reading will be taken each evening when I leave the water so I can start from the same position the next morning.
What are your nutrition plans?
I will be burning around 5000 calories a day so I will need high calorific foods and liquids. I may spend a couple hours per day just eating and drinking.
As well as temperatures as low as 8 degrees Celsius, there is also the threat of sharks, killer whales, jellyfish and hurricanes. What could get you out of the water?
Jellyfish and extreme weather.

See Michael’s website for more information and to donate to the swim.

Our favourite swim books and authors from 2020