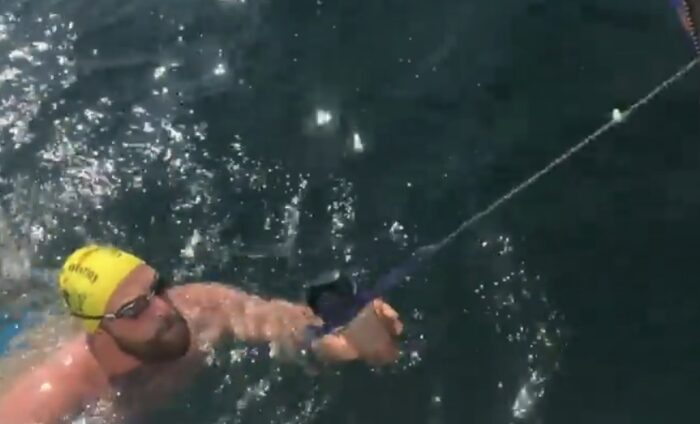 In July 2018, Robert Howlett and Steve Riches became the first two soloists under traditional rules to swim across The Wash since 1976. You can read about their swim here. This year, on 24 August, they supported Alex Begg for his solo attempt, and he set a new world record (subject to confirmation). Robert Howlett sent us the report below on Alex’s swim.

Alex swam the 12.2 nautical miles from Old Hunstanton to Skegness in a new world record time of 5hrs and 11mins, beating the previous record of 5hrs and 57mins.

As for all swimmers, we asked Alex for his previous swim experience and swim times, and these resulted in some raised eyebrows as it became obvious that we had an extremely fast swimmer looking to attempt The Wash. When we gave the swim availability dates to Alex he picked one of the only possible days that would allow us to take a swimmer from Old Hunstanton to Skegness (we usually swim in the other direction). Although we had never yet attempted to take a swimmer in this direction, I have always believed it to be the quickest route as the tides run with the swimmer for seven hours, following you as you cross.

With the date agreed, I plotted the swim route for the tides and was estimating a 5hr 20min crossing. Although I did not publicise the possibility of a new world record, I informed Alex that it was on the cards if he went well and the weather was favourable. A couple of days before the swim all the weather reports were promising an exceptional weekend.

On the day of the swim, the conditions were ideal, and Alex looked up for the challenge. He opted for 30-minute feeds, which was a new feed cycle for the crew, but once the horn was blown and the swim was underway, we could see how effective a 30-min feed cycle could be. As soon as we called Alex in for the feed, he drank every drop within 20 to 30 seconds, and was swimming again before we in the support boat could get back underway. This way, he was able to maintain a pace of around 1:22 per 100m!

I can only say that it was a pleasure to be part of something so impressive. Not only was the pace extremely fast, Alex seemed to pick up speed over the last hour of the swim as he charged towards the beach.

A massive well done to Alex Begg for smashing the record and throwing down the gauntlet for others to chase. Can anyone break the five-hour mark?

“I just get so nervous; my breathing goes into overdrive and I don’t know what to do”