A change of venue didn’t stop two world records being broken and two new ones being set at the Ireland Ice Swimming Championships. Despite initial disappointment that the championships couldn’t take place at Camlough Lake, new venue Conroy Pond soon proved that it had “fast water”. 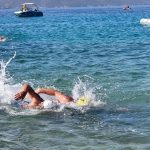 Why aren’t I a faster swimmer?