However, the two open water swimmers face stiff competition from their more famous pool swimming counterparts such as Ryan Lochte, Michael Phelps, Missy Franklin and Katie Ledecky.
In the Female Race of the Year category, Ledecky has three nominations for her 200m, 800m and 1500m performances at the World Championships. The only other nominee in the category is Anderson for her win in the women’s 5k open water, also at the World Championships.
Anderson is also one of three nominees for Female Athlete of the Year alongside Lecky and Franklin.

Wilimovsky has been nominated for the Male Race of the Year following his victory by 12.1 seconds in the men’s 10k swimming marathon at the World Championships, which earned him Team USA’s first spot in next year’s Olympics. He’s up against Phelps, Lochte and Connor Jaeger, who collected silver medal in the 1500m freestyle at the World Championships in an American record time. Wilimovsky is also a nominee for the Male Athlete of the Year against Phelps and Lochte and for Breakout Performer of the Year.

In addition, both Wilimovsky’s and Anderson’s coaches (Dave Kelsheimer and Catherine Vogt) have been nominated for Coach of the Year awards.
The Golden Goggle Awards were launched in 2004 to celebrate swimming achievement and to serve as a fund-raiser for the USA Swimming Foundation, philanthropic arm of USA Swimming. The awards are determined in part by public vote. Voting is open until 13 November.
To vote see: http://usaswimming.org/DesktopDefault.aspx?TabId=2104&Alias=Rainbow&Lang=en 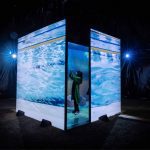