Julie Lloyd mostly swims for her own pleasure and entertainment but tries to do one swim each year for a good cause. Her 2015 swims included a photo-shoot in January for the commercial to launch Sport England’s This Girl Can campaign, Chillswim Windermere and a six-person relay to swim the length of Loch Ness (which took 21 hours and 34 minutes to complete). However, the 2015 swim she chose to use as a fundraiser was the two-mile Great North Swim through which she raised £500 for Pancreatic Cancer Research. She picked the charity after the husband of a close friend died from the disease.

As part of her fundraising efforts she contacted her local newspaper and managed to get her story published, but after that she thought no more about it.
Then, in October, she received a note from Scottish Power to say she’d been nominated for one of their “Your Champion” awards and that she was the Wirral winner for the Champion Person award.
“I have no idea who nominated me,” says Julie, “but I was both shocked and proud.”
Julie was invited to a Gala Dinner on 13 November where Sharon Davies was guest speaker with the other winners from seven regional newspapers.
“Unfortunately I didn’t win the overall award but was delighted to receive a commemorative award for winning my local heat,” she says.
In the past, Julie has also raised funds for the British Heart Foundation following her husband’s successful quadruple bypass operation in 2013.
“Swimming has helped me overcome physical and mental issues in my life,” says Julie, “so do not let anything hold you back from achieving your goals.” 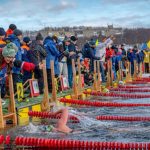