With the FINA World Championship Gwangju 2019 quickly approaching (Friday 12 to Sunday 28 Jul 2019), there were fewer entries than usual in the third leg of the FINA/CNSG Marathon Swim World Series, which took place in Setubal, Portugal. Nevertheless, there was still a high-quality field making this a very competitive swim with 24 men and 22 women taking part.

The women’s race had the two Italians, Bridi and Bruni and Brazil’s Cunha being the ones to beat. The men’s race was more open with the more experienced swimmer Washchburger of Germany and the Brazilian Ponte hoping to add to their overall rankings with Ponte currently in the top 10.

Before the start of the race a tribute was paid by all the elite swimmers, coaches and officials to the late Dennis Miller, former Technical Open Water Swimming Member & FINA Bureau. Hailing from Fiji, Dennis was passionate about the oceans and open water swimming, so it was fitting that this race fell upon World Oceans Days.

Water conditions: Tidal, salt water with currents (at the mouth of the river Sado)

Course description: The course runs parallel to the shoreline, with moored boats in the centre. The swimmers have the current with and against them during the course.

The men’s race kicked off at 16:00 with a dive start. Almost all the swimmers opted for wetsuits. Japan soon had two swimmers in the front, but all eyes were on the experienced Waschburger as he slotted in behind them. Schouten (NED) decided to start at the back of the pack and out of trouble for the first lap before working his way forward.

It was soon apparent that the currents were working in the swimmers’ favour with fast times being published for each 2km lap. The long section next to the beach, which could have been a strong current against them, was in fact hardly against them at all. However, when the swimmers rounded the end of the course and further out into the main body of water for the long straight back to the start and feed pontoon the current was pushing the swimmers along at a fast pace. Each lap was only taking between 18 and 19 minutes.

By lap three the main pack had been ripped apart as Waschburger sensed that this could be his race and some of the less experienced elites were unable to hang on to the pace. Argentina’s three swimmers seemed to be working together nicely to keep contact with the main pack.

On lap four and there were 11 in the lead pack with Waschburger pushing hard. All the swimmers missed the final feed station going into the last lap, at which point the pack was down to six. As the swimmers hit the final 100 metres it was Waschburger out in front, but by the 50m mark and the finish funnel, Miyamoto from Japan put on a tremendous kick to surge past Waschburger and take his first win for Japan, with Moreno Munoz (ARG) just ahead of his teammate Bertola in third.

Speaking after the race, Miyamato said: “The water temp was low for me and it was a very hard race. This was the first time for me to win a world series event and I’m very happy.”

Waschburger added: “The race was different to other world series events due to the number of swimmers being lower than normal. I thought that I could win the race, but Miyamoto was flying at the end.”

Although a slightly smaller field than in the men’s event, it included five top-ranked swimmers who would all be competing hard for the win.

At the start of the first race it was Vilas (ESP) who took on the early pace, with the pack bunched behind her. The first lap was the slowest of the race. Jouisse, France’s only swimmer at the event, went to the front and was in contention for most of the race. It was only in lap three where the main contenders came to the fore. Bridi (ITA), Bruni (ITA), Cunha (BRA), Arevalo (ECU) and Andre (POR) kept the large number of spectators enthralled.

The final lap was the fastest by some way. The crowds roared as Bruni and Cunha came down to a sprint finish from almost 200 metres out, with neither swimmer cracking under the pressure. Although the swimmers had the same times (because of the way the transponder times are picked up on the line) a photo finish saw Cunha claim first place, making this her second top podium spot this year after Doha at the start of the season.

Cunha said: “This was the first time I felt that I raced well in a wetsuit. Today I tried to swim more in the front of the group, like I did in the Seychelles. I came here because I want to keep racing right up to the World Championships.”

Meanwhile, Bruni said: “I’m very happy with the race. It was harder than normal with the wetsuit and it was a very fast clean finish as we didn’t clash at all when we were coming in. I’m looking forward to the World Championships which are coming up in less than a month, which is also our qualification for the Olympic Games so I really want to win a medal there.” 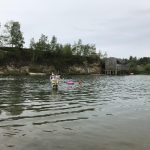 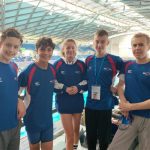