For the swim to count as a new record, no more than three stroke infringements were allowed over the course of the entire swim and the Guinness World Records stated that the attempt would only count if it was completed in under 20 hours.

To prepare for the challenge, the team trained by dropping all other strokes apart from fly. “At the Serpentine we switched to 100% butterfly for both competitions and training,” says Blick. “Building up from 200 metres to the coveted one mile fly title, and supplementing it with our own devised drills to help us relax, then progressing to one hour and finally two hour qualifying swims.”
Despite an initially lumpy sea the team got off to a good start at 4.50am, and the water soon became calm allowing for several hours of good swimming. But then the wind picked up and conditions roughened. Swimming butterfly in rough seas is a tough task, and the speed of the team dropped by half as they battled in the Force 5 winds.
But the swim was not without magical experiences to keep team spirits up. As well as pods of common dolphins, the team were also at one point accompanied by a whale. “We think it was a large minke whale and next time we would like to get it on the team,” says Blick. “That was very special.”
The final challenge of the swim was battling with the tides to cross a shipping lane to reach France. Sam Mould had to swim for an hour into the current just to maintain their position before handing over to Kevin Blick who managed to dodge the ferries as he crossed the shipping lane. Finally, Rob Ouldcott secured the team’s place in the record books by touching land in 19 hours and 15 minutes. 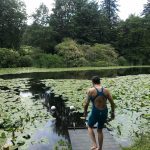