The Serpentine Swimming Club Committee has made the regrettable decision to delay this year’s Peter Pan Cup swim presented by the Greenbury family on Christmas Day – a racing tradition that dates back to 1864.

The decision was been reached after a “long and careful discussion” amongst the committee in light of the current Covid-19 restrictions and the prospect of London moving into Tier 3 restrictions as of Wednesday 17 December.

Having consulted with the Race Subcommittee, the committee realised that given the closeness of the handicap times of those on the existing handicap list, even only allowing those on that list to swim would not allow a safe swim to be organised.

The committee looked at the possibility of drawing lots for those on the current handicap list to create a much smaller field in the region of a dozen swimmers, however, it was felt that this would be unfair to some members who might not be lucky in any draw and who have swam in every race for many years and in one case every year since 1967.

There was also a realisation that limiting any race to those on the handicap list from early 2019 would have excluded many of their more recent and enthusiastic members who have already shown their willingness to volunteer and be an integral part of the club.

Work is being undertaken within the club to get back to racing as soon as it can be safely achieved in the New Year with a view to holding the Peter Pan Cup race as soon as it is safe and practical to do so.

The committee have asked that members do not try and swim an impromptu or planned ‘race’ on Christmas Day.

However, at this time there are no plans to restrict members’ ability to swim on Christmas Day. 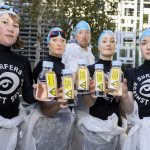 Taking your training outside – getting used to the open water