Andrew Chin, 45, and Toks Viviers, 52, have completed their 200km descent of the polluted Wilge River in Free State, South Africa. The swim was the first of a series Chin is planning to highlight the plight of South Africa’s deteriorating waterways.

Chin and Viviers started the swim at Harrismith on 5 January and completed 200km on 14 January, a short distance from Frankfort.
“We’re battered, bruised and exhausted, but we’re happy that our first swim has drawn some attention to the water crisis facing South Africa. We’re hoping this campaign will lead to action to address contaminated waterways and the impending shortage of clean water,” said Chin.
As per all their swims, Chin and Viviers stuck to traditional rules and wore only Speedos, swim cap and goggles. The swim was not without incident: the pair became separated from their support team one evening and had to take shelter in an abandoned farmhouse – wearing only their trunks. They also suffered upset stomachs, nausea and vomiting due to contaminated water. Viviers was forced to withdraw temporarily for three days after he swam into a submerged tree
The swim was organised by Rivers for Life, a charity which raises awareness of South Africa’s water crisis and urges action.
“We’re using more water than is available and it is fast running out,” says Chin. “Our waste water treatment is in a critical state, over a third of our drinkable water is wasted through leaking pipes and taps and many of our rivers are polluted from sewage and toxic run-off. We hope our swims will ignite action to address these issues.”
The swim’s main sponsor, Aqua for Life – which develops safe drinking water solutions –  has donated 10 filter systems to disadvantaged schools and clinics along the swim route.
Find out more: https://www.facebook.com/pages/Rivers-for-Life/1429604643990439?fref=ts
See also: Would you swim 200km in a polluted river to highlight the problem? 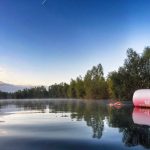