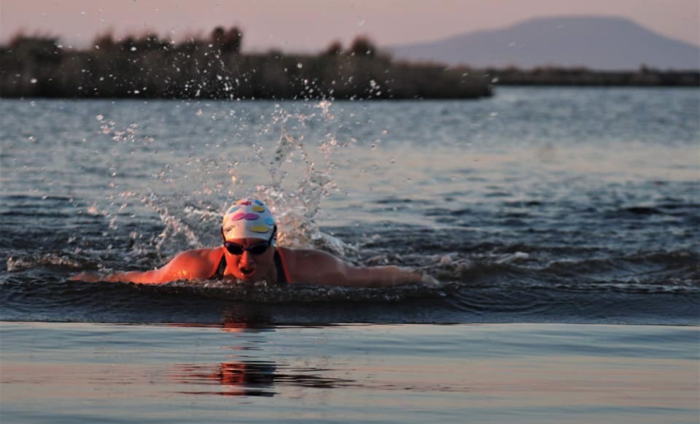 On 22 February 2020, Welsh ice swimmer Cath Pendleton made history by becoming the first person to swim an Ice Mile inside the polar Antarctic Circle. She is now set to feature in a BBC documentary which follows her historic swim. We caught up with Cath to chat about the Antarctica 2020 expedition and how she became an ice swimmer.

How did you first get into ice swimming?

I first started cold water swimming after I hurt my back in 2015. Whilst I was injured and unable to take part in triathlon, I came across an advert for a Chillswim event taking place the following February in 2016. I liked the look of it and so myself and my friends – the Dippy Dragons – started swimming through the winter to prepare. I found I was able to tolerate the cold quite well and from there I became completely hooked.

For me, my ice swimming journey took off very quickly. Shortly after the Chillswim event, I heard about the Ice Mile challenge and by the following January in 2016 I did my first one.

Some people said that I shouldn’t have been able to do it in that amount of time and that it should have taken me two or three years. Don’t get me wrong, ice swimming is extremely difficult, I was training four or five times a week, but I just think that some people can tolerate the cold better.

From there, I continued ice swimming and in 2018 I was lucky enough to fulfil my life-long ambition of swimming the English Channel.

What do you love about ice swimming?

For me, ice swimming is my reset button. I just absolutely love it. It is something I can do to just completely shut off to the world. Physically, it’s not done my waistline any good, so I’m on a bit of a health kick now – but I’m at my happiest in the water. I joke: to make me happy, just add cold water!

Below 3 degrees is just an instant reset for me. We’ve all got busy lives, always running around at 100mph, but because of the nature of ice swimming – having to switch everything off and concentrate on what’s happening with your body, knowing how long to swim for and when to get out – it’s just my complete switch off, my happy place. I’m just never miserable in the winter.

How did you end up on the Antarctica 2020 swim expedition?

Three years ago, Ger Kennedy (the leader of expedition) put a post out on Facebook about it and I thought, my word, I need to swim in there. I had no money to do it, but I was very lucky that when I swam the Channel, Source Insurance and Young’s seafood sponsored me so I could concentrate on raising loads of money for Welsh Heart and SSAFA.

When I went to see them, I said that ice swimming was what I loved. They said to get yourself across the Channel and then we will see if we can sponsor you for Antarctica 2020, and they did. I’m one extremely lucky

Ger then became my mentor and has helped me to achieve my dream goal of swimming a zero ice mile in Antarctica.

All my swimmy friends have also been amazing during training sessions and my partner, friends and family have all been very supportive.

Were you nervous about swimming inside the Antarctic Circle?

I was positive that I could do it, but for me it was the wildlife that scared me the most. The iceberg I was mean to be swimming to had about ten orcas in front of it, so we had to find a new spot. I didn’t want to let it affect me as I couldn’t let my sponsors down. I had to try and shut off everything. I was a nervous wreck, but was trying not to show it.

It was really, really good. I ended up going first and swam the mile in 32:54 after waiting for the pod of orcas to move.

The moment I got my head in the water, I forgot about the wildlife. The thing I love about ice swimming was clear in my mind and I could concentrate on the swim.

All seven swimmers on the expedition achieved their swimming goals and we all thoroughly enjoyed the privilege of swimming in the beauty of Antarctica. We have also all been added to the official IISA list of people who have swam in Antarctica.

Previously, only Ram Barkai (founder of the IISA) had swam an Ice Kilometre inside of the Antarctic Polar Circle. Myself and Paul Georgescu have now become the first swimmers to successfully swim a zero Ice Mile inside of the circle.

For me it’s not about the records, I just love being able to ice swim all over the world. I want to be able to complete the Ice 7s as I have been so lucky to get sponsorship.

I would love to promote ice swimming and show that anyone can do it. I’m not the average looking swimmer and athlete. I want to be able to show people that your body achieves what your mind believes.

If you set your mind to something and you really want to do it, then you can.

A list of all the swimmers on the expedition and their achievements can be found here.