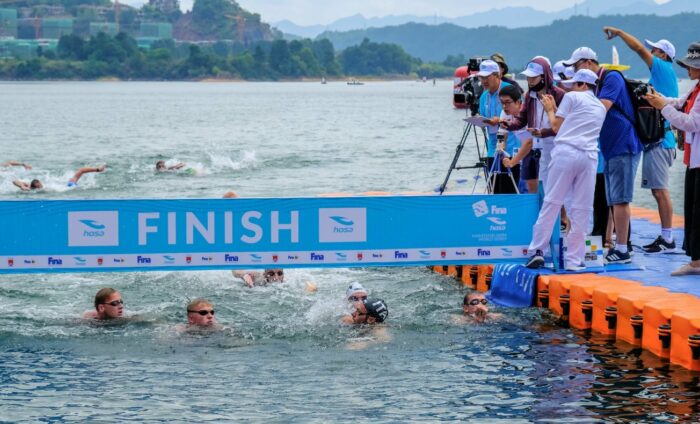 The penultimate race of this year’s FINA/HOSA Marathon Swim World Series took place in hot conditions in Qiandao Lake, Chun’an, China. The water temperature, at 29.5 degrees Celsius, was warmer than a lot of swimming pools, prompting many of the swimmers to pass by the feed station for water just before the final 2km lap, at a time they would normally be ramping up the pace for the final sprint.

In the women’s race, Xin Xin of China claimed her second consecutive victory of the series. The previous month she was the winner by nearly 45 seconds in Lac Mégantic, Canada. The competition in Chun’an was much tighter, with less than a second separating the top three swimmers. Leonie Beck of Germany was second and Ana Marcela Cunha of Brazil was third. Cunha’s consistently strong performances throughout the year mean she remains top of the series table.

The men’s race was also tight but Jack Burnell put his injury worries behind him to slap the finish board first, just 0.1s ahead of Rob Muffels of Germany, while Olympic 1500m champion Gregorio Paltrinieri was half a second behind.

“It is my first time in Qiandao Lake and the water is very hot at last. I tried to save energy all the way and came out first. My final sprint was pretty good, especially the last two, three strokes”, said Burnell.

The win for Burnell consolidated his current second position in the series, behind Olympic champion Ferry Weertman of Holland, who finished fourth in China.

The final race in the series is scheduled for 9 November in Abu Dhabi.