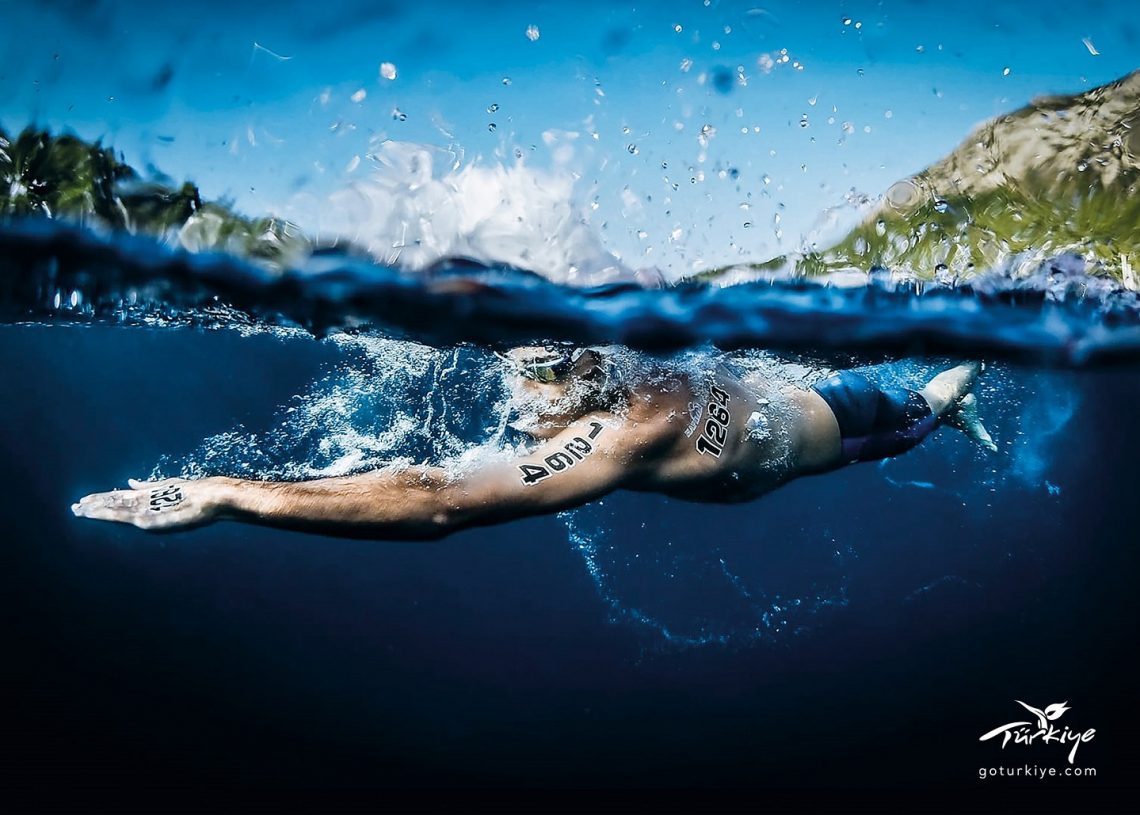 Much more than a championship: AquaMasters is an amazing outdoor swimming experience in beautiful locations

I’ve raced in Turkey before, so I had some idea what to expect: warm clear water, a warm welcome, and a memorable experience. The International Arena AquaMasters Swimming Championships delivered on all those expectations, and more. Over three days, I took part in solo events of 1km, 2km, 3km and 5km, a relay and a night swim, all in spectacular locations. The following weekend, I did it all again. A full programme, yes, but I wanted to sample everything AquaMasters had to offer in Bodrum, Marmaris and Göcek, the second and third events of their 3-event Turquoise Swim Series (the first was in May, in Antalya).

All the swims on the first weekend (28 to 30 Oct 2022) took place at Hapimag Sea Garden Resort, around 16km east of Bodrum, except for the night swim, which was in Bodrum itself. The Hapimag resort sits at the neck of a peninsular and thus benefits from direct access to beaches facing east, west and south. The weekend’s events kicked off at 8:30 on Friday morning with the 5km swim around the large bay on the east side. The single loop course formed a rough triangle, starting and finishing on the beach, and looping around a small island, which made navigation easy. The setting, in a bay surrounded by high wooded hills, was stunning. If you came to Turkey only for that swim, you would probably be satisfied, but there was much more to come.

After the award ceremony for the 5k swim, we took a bus into Bodrum town for the night swim from the town beach, in front of the town’s castle. First we had the opportunity to watch the AquaKids event. While this was a serious race under the rules of the Turkish Swimming Federation, it was designed to be fun and welcoming for children of all abilities. The youngsters warmed up on the beach with Zumba and everyone received a medal after. Even those who weren’t able to complete the swim were picked up in a support boat and dropped off at the finish so they could swim the last few metres, run under the arch and collect theirs, while being cheered by the crowd.

Alright on the night

As for the night swim, I doubt I’ll forget it. I had very little idea of what was going on, where I needed to go or when I needed to be there. Instructions were given but I understood nothing. Nevertheless, I found myself with around 400 other swimmers crammed onto the tiny beach where we were handed illuminated tow floats. Spotlights shone dancing beams of coloured light across the waves. The slimmest crescent of a moon hung above Bodrum’s castle walls to our right. We shuffled, lemming-like, into the sea, following the lights. Swimmers were chatting and laughing all the way around, looking out for each other and making sure everyone was happy and safe. Afterwards we were served hot lentil soup and I was made to feel part of this special swimming community, even though I’d only just arrived.

The next day started early with the 3km swim in the west-facing bay, where all the remaining Bodrum swims took place. While the 5km had started in the water, this one had a beach start: a short, chaotic sprint over the timing mat and into the water. I wanted to race, so naturally I joined in with the mass start frenzy, and it was as hectic as any I’ve experienced. However, it wasn’t necessary as your time didn’t start until you crossed the timing mat. Sensible people hung back and did their own swim. Conditions in the 3k were a little rougher than we had for the 5km but the only real difficulty was sighting on the buoy marking the second corner of the triangular course, as it was in front of the sun. Polarised goggles were a big help here. Otherwise, it was another lovely swim in a beautiful spot. The 1km swim later the same day, and the 2km one on the Sunday morning were similar, but shorter.

Do it all again

Following the swims in Bodrum we transferred to the event hotel in Marmaris for a few days of relaxation and recovery before the next set of swims. A good number of the other swimmers decided to do the same and squeeze in a holiday between the events. We soon had a group wanting to do sunrise swims every morning before breakfast. We also hired bikes, went hiking and tried windsurfing: I guess you’d call it active recovery.

Friday rolled around and it was time to start racing again. We had the same events as the previous weekend but in a different order and in more locations, starting with the 3km at the luxurious D Maris Bay resort on the Datça Peninsula whose perfect sand was allegedly imported from Egypt. The swim took us around a small island in the bay and back to the main hotel beach where we were served soup and sandwiches and could relax in splendour until the night swim.

As the sun dipped behind the mountains, the air temperature dropped. I was tired after the 3km race and feeling cold. I nearly withdrew from the night swim. I’m glad I didn’t as I experienced bioluminescence for the first time. As my hands entered the water, tiny beads of light collected around my fingers, detached themselves and drifted past my face. It was so mesmerising I forgot to look where I was going and momentarily lost my bearings. In contrast to the music and dazzling lights of the Bodrum night swim, this one was serene and other-worldly, and another swim I’m unlikely to forget. If you ever do these events, ensure you also sign up for the night swims.

The next day, Saturday, was a full day of swimming in front of the Marti Resort Hotel in Marmaris, with two individual swims (2km and 1km) and two relays with swims of 500m each. The atmosphere was festive and this was another amazing location in a protected bay surrounded by forested mountains and islands. However, they saved the best until last. For the final day of AquaMasters’ 2022 season, we travelled to Göcek for the fabulous 5km Paradise Crossing, which you can read about in the December 2022 issue of Outdoor Swimmer magazine.

For me, a highlight of the series was the relays, of which there were three variations: men’s, women’s and mixed. Many of the swimmers taking part belong to Turkish masters swimming clubs resulting in inter and intra-club rivalry between the teams. Each swimmer completed a 500m loop, ran up the beach and high-fived the next member of their team. It was always something of a mystery waiting to see which swimmer would emerge from the water, and every take-over was accompanied by much cheering and shouting. It was a lot of fun and, despite the short distance, exhausting as there was pressure not to let down your team.

Finally, prize-giving ceremonies featured prominently over the weekends, with age-group winners (in 5-year age bands) being presented with medals after each race, including after the relays. Unlike races in the UK, where medal winners often pack up and leave before prize giving, there were no empty spots on the podium. Wins, it seems, were not just for the individuals but also the clubs they represented. A spot on the podium was a photo opportunity for the club banner as well as the medal winner. In addition, one of the prize-giving sessions was followed by “Aquatalks”, which gave participants a chance to hear from and ask questions of a panel of swimming experts and enthusiasts. This year’s panel included former world breaststroke champion James Gibson, German swimming and triathlon coach Michael Tronczik, and me! Simultaneous translations between Turkish and English were provided throughout.

At the time of writing, locations and dates for events in 2023 haven’t been announced. The overall series consists of three weekends. The current expectation is that the Antalya races will be in spring, with those Bodrum, Marmaris andGöcek in autumn. It’s possible that some of the locations will be different than in 2022 but I’ve no doubt they will be equally impressive.

At the events, the organisation is good, but as a foreigner it may initially feel confusing. Don’t let that deter you. Enough of the local swimmers speak English and are more than willing to help. Once registered for the swims, you should receive discount codes for the event hotels. Depending on which swims you do, using these may be the easiest option, but if you have your own transport then staying elsewhere is possible. The organisers are very helpful and welcoming to foreign swimmers so feel free to contact them directly if you have any questions.

Simon was a guest of AquaMasters at their events in Bodrum, Marmaris and Göcek over two weekends at the end of October and beginning of November. He stayed in the Hapimag Sea Garden resort near Bodrum, the Marti Resort Hotel in Marmaris and the Rixos Premium Resort in Göcek. He flew with Turkish Airlines to Bodrum and returned from Dalaman.