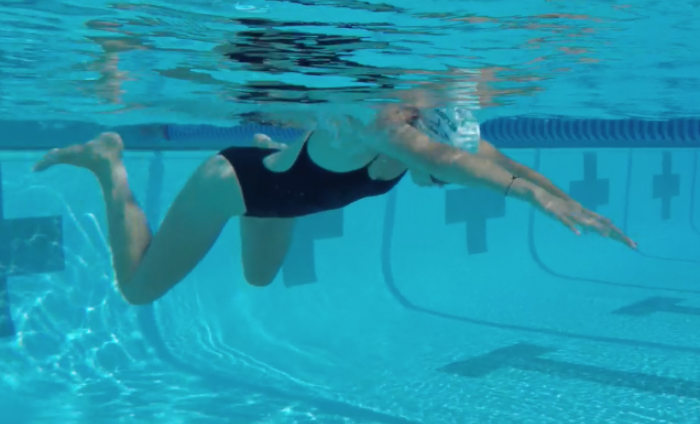 Breaststroke is the world’s most popular stroke, primarily because it’s closest of all the strokes to how humans swim instinctively. However, those instincts lead to a thoroughly wasteful way of swimming. In this article I’ll teach a counterintuitive – but markedly more efficient – way of swimming breaststroke.

1. Over-and-under breaststroke (like butterfly) is a ‘wave-form stroke’ in which we travel forward – a bit like a mythical sea monster – by surfacing to breathe and submerging to streamline. But because you travel much farther and faster underwater – and spend that time in a restful glide – strive to spend as much of each stroke cycle as possible in streamline below the surface. Minimise time in non-streamlined, above-surface positions.

2. ‘Hug’ the surface. Wave forms have two properties: wave amplitude and wave length. When you compress amplitude you increase length, i.e. travel farther and faster in each stroke cycle. Do this by ‘hugging’ the surface – swimming barely above and barely below. How you breathe is key to achieving this, as I explain below.

3. Keep head aligned. Along with submerging in each stroke and hugging the surface, a critical skill in maximising forward motion – and energy or momentum – is to keep your head aligned with your spine during and after breathing. Lifting and lowering the chin increases up-and-down movement in the body. Breathe as if wearing a neck brace.

4. Take smaller strokes. As humans (not fish) we’re simply fantastic at burning energy and creating drag with our pull and kick. Unfortunately we are not so good at creating propulsion. You absolutely cannot go wrong by making your pull and kick smaller.

Each cycle of breaststroke has several critical ‘moments’ during which you can greatly increase efficiency by performing several ‘mini-skills.’ Each moment lasts just a fraction of a second: you’ll need strong and targeted focus to acquire the critical skill. To learn each, swim repeats of 25 metres or less with laser-like focus on just one thing.

This is the most critical, but easiest, skill. Spend 60 per cent or more of each stroke cycle in streamline below the surface by doing the following, one at a time:

Get everything beneath the surface; leaving even a sliver of your head above the surface will slow you down.

But don’t dive. Slip barely beneath the water. While in streamline: (i) release head between arms with eyes down; and (ii) streamline feet behind lower leg.

Don’t ‘climb’ back to the surface. Momentum and buoyancy will take you there naturally. Experience this by taking a single stroke – or complete a series of strokes – by holding your sub-surface glide. Feel yourself glide naturally to the surface. Repeat until you’re keenly aware of the moment when your head would break the surface on its own, with no help from your hands.

A small, quick, and light hand scull coordinated with the natural forces of momentum and buoyancy maximises propulsive power while minimising muscular effort.

Focus on the following:

‘Help’ with hands. Feel the moment just before your head breaks through the surface. At this moment, use your hands – lightly and briefly – to ‘help’ your head break through in the direction it’s already going.

Stay aligned. Your head is moving in the ideal direction to allow an effortless breath with no chin-lift. Keeping head in-line will greatly increase power.

Graze the surface. Graze the surface with your chin as you breathe. And keep your gaze on the surface at a spot just two inches in front of your nose. Make your breath ‘sneaky’ – as if trying to hide it from a poolside observer

Nearly everyone tries to kick too big and too powerfully, wasting energy and increasing drag while doing little for propulsion. A smaller, lighter and more precisely directed kick will create far more thrust with far less effort than a higher-powered kick. Focus on the following:

Sneak your legs. Avoid creating drag by ‘sneaking’ your legs into kicking position. Keep them hidden behind your torso as you draw them forward.

Kick hands forward. Use this as a cue for stroke timing. Use feet to kick your hands – and your entire body – back to streamline.

Smallest possible. A smaller kick will create more thrust and less drag. Strive for the least knee-flexion and heel-separation as you ‘cock’ your feet for the kick. It’s easy to make this movement too big, nearly impossible to make it too small.

Easy does it. Push back lightly against the water, while maximising backward pressure. Avoid kicking out, down or in. A lighter, more directed, thrust will move you forward more – and move the water around less.

Breaststroke creates a large bow wave. Do your best to minimise it while stroking and breathing. Then return underwater by ‘spearing’ through your bow wave. Here’s how:

Thread the needle. Align arms, head and shoulders to ‘dart’ through the smallest possible hole in your bow wave.

Extend your head. Return your head from above the surface to below – and between your shoulders – by extending it forward into streamline. Moving it forward, rather than down, will add significantly to forward momentum.

Barely below. Get your head – and all body parts – barely beneath the surface. Have someone watch to ensure that you ‘disappear’ below the surface during glide – and that your body is aligned, horizontal and forward-moving.

Wild Swimming: How to spot a clean river 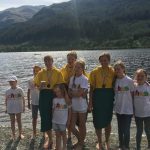