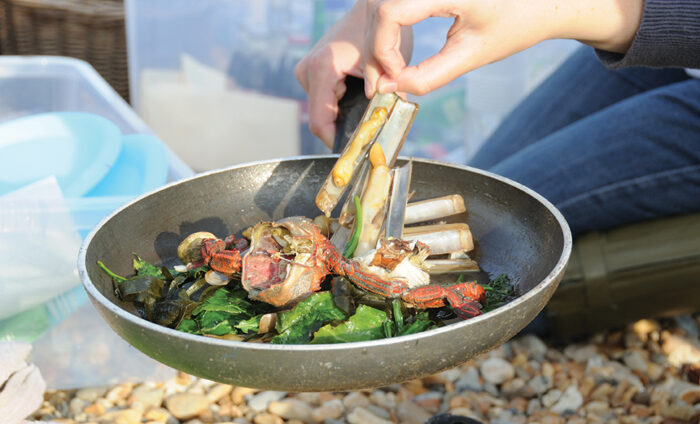 Why pay for your post swim snack when you can forage for it?

Seaside and freshwater swimming spots are home to numerous plants that are worth picking to take home for dinner, or eating straight away in a post swim cook-up. Open water swimming and foraging are natural companions as swimming can work up an appetite, and water clean enough for swimming is clean enough for plants growing in it to be eaten. Foraging can furnish keen cooks with ingredients that are not only particularly fresh, but sometimes hard to find in shops or prohibitively expensive. The most important considerations for an open water swimmer who is a novice forager is being able to identify plants correctly and making responsible decisions on whether the plant is abundant enough to be collected.

Freshwater is home both to some eminently edible plants and a few that are highly poisonous including Hemlock Water Dropwort (Oenanthe crocata), sometimes referred to as Britain’s most poisonous plant.

For sea swimmers seaweed is a relatively forgiving area to start foraging as there is only one species that is poisonous, but this grows in deep ocean and is unlikely to be encountered by a swimmer. However, seaweeds still require identification before eating because different types require different cooking techniques. For example, Purple Laver (Porphyra umbilicalis) takes a few hours’ boiling before it is rendered into laverbread. A more readily edible seaweed is Pepper Dulse (Osmundea pinnatifida), which makes a peppery and slightly fishy seasoning that can be used fresh or taken home and dried.

Not every plant that is edible should be picked. Sea Holly (Eryngium maritimum) was nearly picked into oblivion by demand for its candied roots combined with loss of its sand dune habitat. Sea Kale (Crambe maritima) can appear locally abundant, but it is largely restricted to areas of pebbly beaches that are rarely immersed in seawater – an uncommon habitat – and this makes the plant rare. Harvesting Sea Kale’s edible emerging young leaves impinges on plants’ growth through the rest of the year.  Sea Kale is best appreciated on beaches for its honey scented flowers.

When picking anything you need to leave enough undamaged plants to ensure the population regenerates. A good rule of thumb is to pick only a small fraction of what is there so that you cannot discern that anything has been taken.

There are occasions in which it is illegal to pick plants. All plants in the UK are protected by the Wildlife and Countryside Act (1981), under which it is illegal to uproot a plant without the landowners’ permission. A few plant species are considered so rare that there are additional legal restrictions against picking any part of them. Additionally, most nature reserves and Sites of Special Scientific Interest (SSSI) prohibit picking any parts of any plants growing on them.

Equipped with knowledge on legal restrictions, advice from a local forager, and a foraging or plant identification guide, swimmers can enjoy a notable aspect of swimming outdoors that is absent from pool swimming: the tastes of your surroundings.

Originating from South Africa this plant has escaped from gardens and taken up residence on sunny seashores where it can evade winter frost. In Cornwall, California, New Zealand and the Mediterranean Ice Plant is considered invasive as native flora is smothered by its thick mats of succulent leaves, which in summer are covered in white or pink flowers. When the fruits change from green to slightly shrivelled yellow or brown they are sour, sweet and a little salty. They are worth tasting and in areas where they are invasive picking enough to make jam would not be unreasonable.

It is fitting for a plant that works so well paired in dishes with fish to thrive growing along the seashore. Fennel’s leaves are finely divided into ethereal fronds that are full of flavour. Leaves can be stuffed inside fish, dropped on the barbecue to flavour cooking, or chopped into salads. Fennel flowers are nearly impossible to find in shops but are used in many Italian recipes and enhance a dry rub for pork.

Undergoing a revival. Pickled Rock Samphire leaves had fallen out of favour in the UK but appear as a standard dish in Turkish fish restaurants and in vast jars at Turkish greengrocers.  Their flavour is aromatic and they are well worth the effort of pickling. With a strong flavour fresh leaves are best added to other dishes in small amounts otherwise they may be overwhelming.

A succulent plant that grows in mud washed by the tides, Marsh Samphire has a strong grip in the mud and tough stem bases, so it is best collected with a pair of scissors.  Raw it is satisfyingly juicy and a little salty. It does well treated like asparagus; parboiled and served cold as a salad, or briefly sautéed in butter with garlic.

A tough seaside plant that can grow in rough grass, sand dunes or shingle. Sea Beet is the wild ancestor of beetroots and sugar beet. Its succulent leaves can be cooked like spinach, but they are more substantial than spinach and don’t wilt to half their size on heating.

While technically classified as a ‘red seaweed’ Irish moss can range in colour from red, to brown to yellow. Its flavour is negligible but as a culinary ingredient its value is its transformational properties: clarifying beer and setting desserts or savoury terrines.

This bright green seaweed looks like wilted lettuce leaves.  Collect it fresh from where it is growing in the water attached to rocks, rather than using bits washed up on the shoreline. Given a rinse to get rid of sand or grit it is thin enough to cook by brief sautéing in a pan on the beach.

Watercress thrives in the shallow margins of spring fed rivers. As it grows in thick mats often intermingled with other plants be careful to pick only watercress and avoid Fool’s Watercress (Apium nodiflorum) and Hemlock Water Dropwort (Oenanthe crocata).  Watercress can be a host to liver flukes, which spend the rest of their lifecycle in sheep, cow or human hosts. It is in theory possible to scrupulously wash watercress and eat it fresh, but far easier to use foraged watercress in dishes where it is cooked and there is no need to worry about liver flukes since any present would be killed by cooking.

Different parts of Reedmace can be eaten in different ways. Immature flowers and seeds are edible, if labour intensive to process. From autumn through until spring the starchy and fibrous roots can be baked in a fire, although if you are digging up roots in the UK you will need the landowner’s permission.  In spring the emerging shoots and young leaf bases can be eaten raw or used like a bamboo shoot – this is the easiest part to collect and consume if you are confident you can avoid accidentally picking iris leaves, which can sometimes grow amongst them.

How to plan a wild swim

How is open water swimming different to the pool?