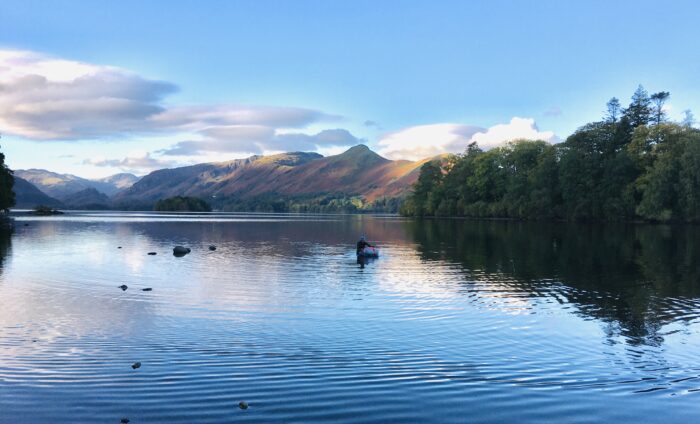 I have always loved adventure – especially in remote places where you can plan and pull off a multi-day, self-contained journey. In popular parts of the UK, it can be hard to find places that feel this remote – but all I needed was a plan, a place and some buddies to join me.

Lining all these elements up together initially proved to be difficult. The proposed dates didn’t mesh in with friends that were keen to join me, but after a bit of a rethink, a solo trip to the Lake District was born: a night swim with an overnight bivvy using a Ruckraft – a piece of kit that transforms your rucksack into a raft to tow across water.

Once a plan was set, and with the full Hunters moon in October fast approaching, I headed north at the end of September for my very own swimming ‘micro-adventure’.

As we all know, the Lakes can be a busy place by day; however, once the sun has set, the crowds disappear. A remote feeling can be achieved so much more easily with a night-time journey – be that a walk, run, bike, swim, paddle or anything else.

So there I was, at the water’s edge at 9pm, fully-loaded Ruckraft floating in the shallows, the pitch black emptiness of the lake and the dark sky above, and the crowds buzzing around the launch landings strangely absent. This was the point beyond which I would be committed. Wading out the first few steps, I pushed forward and then I was in. After a dozen strokes, I looked back at the shore to see that I was alone in the depths of the lake and heading for the island.

I knew the lake, the features, the map and lake views from many angles before I set off on the swim, but suddenly in the dark I was confronted by a new perspective. The minor distortion of the view through my goggles removed any definitions of the shore, so head up breaststroke without goggles was the only option to restore a tiny bit of vision and aid navigation. Swimming on a bearing, in the lake, on your own, in the dark, wasn’t easy either – but fun trying.

I paused in the middle of the lake where, other than the light strapped to my Ruckraft, it was pitch dark. It was incredibly quiet – a brief moment of tranquillity – with the only sound being the occasional lapping of waves onto the raft. My head up breaststroke was ‘slow and steady’, the journey was taking longer than anticipated, although without sight of the time, to know how long I had been swimming was as hard to estimate as the distance covered. For safety, I had decided to wear my wetsuit and socks; the water was perhaps 12 degrees, but the air temperature had dropped to 3 degrees. After another five minutes, I was at last approaching the island.

Once I landed, I quickly changed and wrapped-up to stay warm. With my wetsuit off and woolly hat on it was time to relax and enjoy a cup of tea. I laid out my bivvy bag, ensured I was fully prepared for the (cold) night ahead, made a tiny little fire, and sent a few messages to let my friends know I was safe. Soon the moon peaked through from the clouds and a clear sky emerged.

The night was chilly and I was up early; after a brew and porridge, I packed up for the return leg. By the time the sun emerged from behind the fells, I was already halfway across to my landing point – navigation seemed so easy with the daylight!

My micro adventure in the Lakes showed me that there are lots of adventures to be had in the UK – both big and small – if you choose the time, place and conditions to suit you, and have a robust and rigorous approach to safety and risk assessment.

Paul Mackenzie is an STA Open Water Coach and RLSS Open Water Lifeguard based in Surrey who loves taking himself and others on adventures.

When can I start swimming and training outside?

Take your training outside – week 2