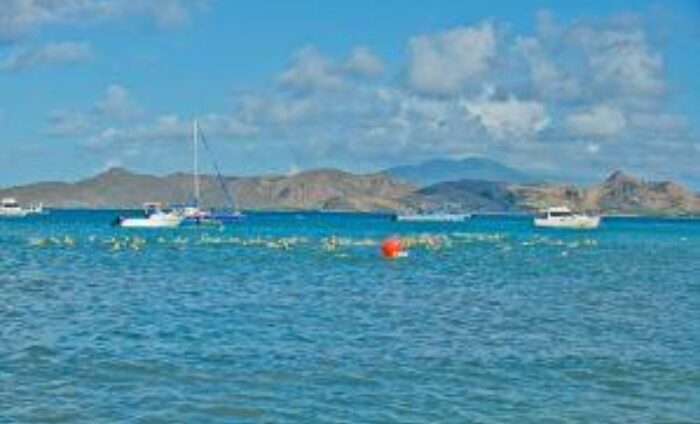 Liz Torode took one of seven SwimTrek spots on a swimming holiday to Nevis, where she took part in a local race

Easter Sunday: a day when typically I’d expect to be gorging on chocolate eggs with perhaps a short stint at the pool to burn off the calories. Instead I found myself on the lush Caribbean island of Nevis participating in a 4k swim to the sister island of St Kitts across the “Narrows”.
This year was the 13th annual Bente Weber memorial swim between the islands and attracted 166 open water swimmers drawn from all over the world. Some were serious swimmers and triathletes gunning for fast times and the chance to win a coveted stone turtle trophy. Others came along for the challenge and sheer pleasure of swimming in bright clear waters. The event aims to attract a wide range of athletes and encourages less confident swimmers to use fins and snorkels in the assisted category.
The swim began at Oualie Beach (pronounced “Waalie”), set to start at 8am but with a little dose of “island time” we set off just after 8:30. With the water at a balmy 27 degrees no wetsuits were in sight and the clear, shallow water gives you the opportunity to spot plenty of sea life on the way. My personal list included three turtles, a couple of sting rays, a shoal of silver barracuda and numerous brightly coloured little fish. Conservation is becoming a big thing in the islands and the Narrows has been designated a marine conservation area.
Part way through I realised my companion was Jane Hansom, an experienced triathlete and past competitor. Each thought the other knew the best way across but our choice of route left a little to be desired! After a slight detour and final burst against a gentle current we made it in at about one hour fifteen. Enough to get one of the trophies each.
Overall winner was local Valerie Gregoire who stormed across in at just over the hour. Among the rest of the competitors were a young group from St Martins who cleaned up in the younger age categories and my own party from Swim Trek. This was the company’s first trip to Nevis, with the intention of running several holidays a year in future. All of our group of seven swimmers plus guide Huseyin completed the course, including the oldest swimmer on the day, Mark Krakower, a sprightly 72 year old from California.
So back to the UK and I’m already planning next year’s trip. It’s a stunning place to swim and a great way to start the season. And now I ###em