Wild swimming is as old as humankind itself, but it's still a new sport. As it grows, it draws in younger swimmers. Rowan Clarke meets the next generation ready to explore our lakes, rivers and seas

In the Siberian Yenisei, young children swim the ice floes with their parents from as young as they can handle the biting cold.

In the Peruvian Amazonia, children teach their younger siblings to swim. Children have always been drawn to wild water, but they’ve only recently had the chance to try it as a sport.

As open water swimming’s profile grows, it naturally attracts younger participants. That can only be a good thing, not just raising the sport’s profile but also inducing new investment in facilities and coaching that benefit the entire open water community. More than that, though, getting young people into open water helps remind us that water is a great leveller, and swimming is an activity for everyone.

Despite having origins as old

as humankind itself, open water swimming as a sport has a relatively short history. It was in the early 19th century that Lord Byron crossed the Dardanelles, and while the first modern Olympics held its swimming events in open water, it wasn’t until 2000 that an open water swim became part of the games.

In the last 18 years, most open water competitors seem to have come from mainstream swimming. Keri-anne Payne, for example, began her open water swimming career after missing out on a medal in the pool at the 2006 Commonwealth Games, aged 17. Successful competitors like Payne have helped create opportunities for even younger swimmers to deviate from mainstream competitive pool-focused clubs, inspiring them to think about open water swimming.

At the age of 13, Lola Bird decided that she wanted to swim the Channel. Always a strong swimmer, Lola swam with her local club but quickly realised that she preferred long-distance, endurance swimming to sprinting. Decked out in

a starter wetsuit, she took to open water for the first time this spring. “It’s more exciting than normal swimming,” she says. “It’s less harsh, I think. It is cold! We start off getting used to it, that helps. Then we do different drills to help with

sighting and turning around buoys.” Lola doesn’t know how lucky she is: her club coach is on a mission to make open water swimming accessible to young swimmers. Only 25 herself, Laura Nesbitt was also a regional-level club swimmer in her mid-teens. She wanted to try open water swimming but her coaches had neither the facilities nor the interest.

When an injury further thwarted

Laura set up Cheddar Kingfishers with

a focus on making swimming fun and enjoyable. Open water swimming began as a team-building exercise for the club. But it soon became a way to diversify

its swimming options, and at the Open Water Regionals in Weymouth last year, a squad of ten 11 to 16-year-olds amazed themselves by winning 15 medals.

open water swimming, the children I coach get three main advantages,” she says. “One, it’s outdoors, so good for mental health; two, it keeps them fit and interested in sport;

they might go on to teach or coach – it feeds back into the sport.”

But this growth in open water swimming doesn’t just bring in children from club backgrounds. Unlike any other sport or activity, it’s growing just as fast among adults. A natural consequence of this is that more and more children are following their parents into the water.

to Rock swim. Despite the event

being her second swim ever in open water, Isabelle showed determination, swimming skills and resilience that were way beyond her years. “The conditions were horrendous – people were getting hauled out,” said her mother, Marie. “At 29 minutes, the first elite swimmer got out and threw up. I

was horrified and wondered what

I had done by allowing her to enter. But at 32 minutes, Isabelle popped up. She

just said ‘that was brilliant – there were no turns!’ I was amazed.”

done some club swimming, she

hadn’t been motivated to pursue it.

For her, open water swimming is less about competition and more about enjoyment, and having an affinity with water that both she and her mother have nurtured since babyhood. Isabelle was one of baby swim school Water Babies’ first ever pupils at 12-weeks-old, and Marie now owns Water Babies in Notts and Derby.

“Swimming since babyhood has given her innate physical strength and confidence, and she loves swimming,” says Marie. “At no point in the Padstow to Rock swim did she doubt herself – she has an affinity with water. She finds swimming therapeutic while studying for exams, and plans to do more open water swims.”

That natural affinity with water is perhaps the key to starting open water swimming from a young age. Water Babies works on the principle that babies are born with a set of reflexes that allow them to hold their breath underwater and a complete lack of fear of water. By gently submerging them and introducing early swimming skills, those reflexive instincts become learned actions, and water confidence flourishes. Water Babies’

foundations are based on research by Francoise Freedman. A swimmer herself, Freedman lived with forest people in Peruvian Amazonia where she

observed the joy that families took from water and how the children taught their younger siblings to swim. The joy of wild water is just what open water families are discovering now. As a sport, it’s being buoyed by a fresh influx of youngsters who will excel in pushing it forward and opening up new opportunities. But it’s also helping us tap into something more profound. The outdoor swimming community knows the qualities of wild water to de-stress and promote health and well-being, and whether we lead our children into the water or vice-versa, it can benefit us all.

It’s time to share the joys of outdoor swimming with our children and grandchildren so that, like Freedman’s Amazonian people and the Siberian ice swimmers, we can enjoy the wonderful benefits together.

At what age can you introduce your children to open water? We asked Water Babies’ senior tutor and franchisee for Notts and Derby, Marie Smith.

Can babies swim in open water?

Babies under 12 weeks or 12lbs shouldn’t swim in water colder than 32°C. Babies over that threshold but less than 12 months shouldn’t be in water less than 30°C as they cannot regulate their body temperature. So you can start swimming outdoors from around a year old.

How do we take our first dip?

Get the kit and do your research first. Start with a gentle dip at your favourite swimming spot – toes in, paddling – and follow your child’s cues.

Can I get a little wetsuit?

Yes – you can get wetsuits for babies, toddlers and children. Make sure

it’s tight-fitting to trap a layer of water next to their skin which warms up to body temperature.

Where can we swim?

Your favourite outdoor swimming spot is a good starting point. Watch for currents, sudden depth changes and obstacles. Stay in your depth, and keep hold of your child – even

if they have a buoyancy aid. If they can swim confidently, make sure you stay within arm’s reach at all times.

The most important thing is to keep the mood light and fun, pass on your knowledge and back up your children’s open water adventures with swimming lessons. 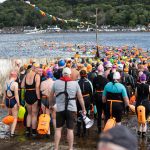 “Swimming outdoors helps me cope with the loss of my daughter”

Linford Christie OBE on his new interest in outdoor swimming