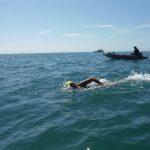 Around the Isle of Wight on the Blindside