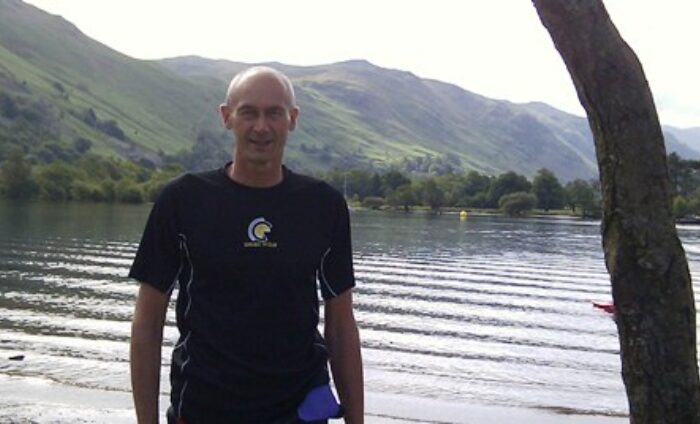 In all my 54 years I have never been a good swimmer: out of breath after 2 lengths of a 20 metre pool, maybe it was a stupid idea to get into triathlon and open water swimming? It was only the discovery, in May this year, of the buoyancy a wetsuit gives that has allowed me to do something I thought I never could.

At 6’4″ tall I have the height swimming, but weighing only 12 stones wet through I lack the physique and upper body strength. Not only that, years of running have destroyed any flexibility in my ankles so my size 12 feet sit at right angles to my sinking legs leaving me with the hydrodynamic qualities of a dustbin lid.
Nevertheless, a swimmer I became. And this is the story of my perfect swim on 10th July 2011.
Rarely have I seen Ullswater looking so calm. A beautifully sunny day with not the hint of a breeze, the fells reflected off the lake as we drove alongside the shoreline en route to Patterdale. It was a perfect morning for swimming: warm and calm.
As we approached the car park there was already a steady stream of wet-suited competitors snaking its way to the registration area by the lake. The smiles and chatter didn’t disguise the nervousness of the first timers.
Soon I would be one of them. Parked up and changed into my wetsuit, top half folded down and proudly wearing my Carlisle Tri T shirt and hoodie, I checked off all my essentials – goggles, Garmin, swim socks, swim hat. My wife Rachel reminded me to remove my wedding ring. No, not a domestic, it’s just that when my hands get cold the ring gets dangerously close to slipping over my knuckle. I thanked her for the reminder then completely forgot!
As we walked the half mile to the start I saw all the ‘500 metre’ swimmers being briefed and hastened my pace, to wish my friend Jan good luck on her first open water swim.
As the 500m swimmers set off I felt my first bout of nerves. Ignore it and think of something else, I told myself. But scanning across the lake and seeing all the yellow buoys it looked an awfully long way to swim! This was going to be my biggest ever swim. I knew I’d be swimming for around 2 hours and there wasn’t anyone I was trying to beat, so I repeated to myself, “just relax, take your time, everything will be cool.”
There were over 200 swimmers at our pre-race briefing. I didn’t pay much attention to what was being said as I’d heard one at Derwent for the ‘mile’ and read the notes for this one previously so I was happy with that. Anyway, I knew I’d have people around me and always somebody just in front so no worries, or so I though.
Briefing over and heading into the water, I secured my Garmin between my neoprene and outer red Epic swim hats. I wanted an accurate measure of time and distance but it doesn’t work properly on my arms.

We entered the water and swam towards the start. I took up a position near the back so as not to get in the way of ‘proper’ swimmers, at which point I suddenly remembered my wedding ring and I didn’t have time to swim back to shore. The race started and I struck out bravely towards the first turn point.

It quickly became apparent I was the back marker due to unhealthy interest the rescue kayakers were paying me. At the second turn buoy I looked back. Just as I suspected: buoys, canoes, boats, shoreline, fells, but no swimmers. That was it, on my own in the first 200 metres with just a very patient canoeist to keep me company.
Still, the main pack didn’t seem to be that far ahead as we swam along the back straight, and I thought (for a minute) if I put a spurt on I could maybe get back with them. On reflection though I decided this was a marathon (in MY swimming life) not a sprint, so I just relaxed into the ‘zone’ and looked at the beautiful view every time I took a breath.
Another canoeist joined my guardian angel and they chatted away, although I could only hear them when I went for a breath. I wanted to join in the conversation but it was a tad difficult, so I just plodded along in my routine. I hope they didn’t think I was ignoring them. By the time I reached 800 metres I really was a lone swimmer and had difficulty seeing any others, but… what was this? Another red swim cap just to my left. Had I actually caught somebody or was he overtaking me and I hadn’t been last after all? We swam fairly close to each other for 100 metres or so, then he just picked up speed and left me. Mmm… obviously a late entry into the water.
Bzzzzzzzzzzz, the Garmin vibrated on the top of my head to tell me I’d completed the first mile – almost half way and still feeling good.
My boated companion still in attendance was now joined by a 2nd canoeist. A friendly looking chap in a cowboy hat, he smiled down at me, maybe out of sympathy more than anything else. Had he just come for a chat to break the boredom of my chaperone? He only paused for a short while and was off again. Shortly pursued by what seemed like 2 very fast large frantic fish fighting over their prey! Only thing was they were both wearing red swim caps! Yes, I had been lapped, these 2 guys were past me and out of sight before I’d put in another 30 strokes, now that’s what you call swimming! So now I’m thinking ‘Here they come’, everybody else will be past before I even complete one lap but no, eerily quiet, until I was approaching the end of my 1st lap, when more fast swimmers came past me on my left and made the right turn 30 metres in front of me towards the shore and their well earned glory. As I had to go straight on I approached the yellow buoy as if it were a Belisha beacon at a pedestrian crossing. I didn’t want to cause a multiple pile up so made sure I checked all around several times before I crossed the ‘fast lane’. Once past that I could relax knowing that nobody else would overtake me.
I carried on in my metronome fashion and by now my canoeist had become so bored she actually started paddling alongside me in reverse! We had been together for well over an hour, and I half expected a few Eskimo rolls to be thrown in just to break her monotony. I almost felt like we were getting to know each other, even though our conversation only amounted to the occasional shout from me of “Which buoy?” and her words of encouragement.
I was content in my slow routine, when all of a sudden a small solid object entered my mouth, I just spat it out immediately! That was odd, I know I’m a novice to open water swimming but it seemed strange. I tried to put it out of my mind and carry on swimming but I started to be plagued by negative thoughts: my back’s hurting, I’m getting a pain in my leg, now my neck, my groin hurts, are my goggles starting to leak, I think my swim socks are slowing me down. I wasn’t going to let these things beat me, I was going to finish this. Concentrate on the job.
Eventually, bzzzzzzzzz, 2nd mile in, only another half to go, it’s in the bag. Good job there was another race after mine otherwise everybody would have gone home long ago.
As the minutes (and hours) ticked by the final buoy came into sight. I could see the crowd in the distance by the finish line but surely that buoy is drifting further away? I eventually caught it and turned for the shore. The marshals were standing there – a crowd of over a hundred waiting, some obviously thinking ‘For goodness sake man get on with it, I want to start my race’. I kept checking down for the first glimpses of the lake bed, nothing, a few more strokes, still nothing, until finally, there it was, only a few more and I’ll be able to stand up for the first time in over two hours. Yes, that’s it, feet down, stand up, fall flat on my face back in the water, stand up again, stagger forward as the water gets shallower, start to wade and try to keep my feet. I was happy; I’d made it, huge cheers and clapping from everybody, the distinctive loud whistle from Rachel and people shouting my name. There was no other swimmer near. This wall all for me. Unbelievable! As I stumbled out of the water onto dry land and over the finish mat, I was in a very happy place. The response from everybody was almost too much, my uncontrollable giggling sparring with my emotions to keep the embarrassment of tears at bay.

A big hug from Rachel. A quickly checked my finger. Relief. The ring was still there (at least it wasn’t the hard thing that landed in my mouth). I checked my Garmin. 2 hours 4 mins for 2.6 miles and thought “Result. I didn’t even break stroke.” I may have ended in last place but scored a few ‘firsts’ for sure. Never before has the phrase ‘It’s not the winning, it’s the taking part that counts’ meant so much to me.
For me this was a very special sporting moment, right up there with jumping up and down to The Black Eyed Peas on The Champs Elysees before start of the Paris Marathon and running down from Tower Bridge in the London Marathon. Yes it was that big. It will stay with me forever!
To all my fellow swimmers, supporters and friends, thank you, as the saying goes ‘You made an old man very happy’.
Oh, one last thing. I later found out that Teri, who swims slightly faster than me, had been ill during the second lap and puked in the water, now that object which entered my mouth? It was about the size & texture of diced carrot, but surely not? 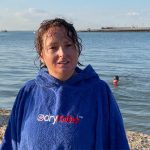 5 strategies for swimming in rough water