When I was about 10 I did a sponsored swim where I had to do as many lengths as possible in 15 minutes. As I was sponsored per length, it cost some of my neighbours a lot more than they expected, and made me wary of doing sponsored swims for years. It also feels a bit odd to ask people to pay money to encourage me to do something I’d want to do anyway.

However, last weekend I made an exception and raised more than £400 for the Royal Life Saving Society by swimming a lap of Brownsea Island. The RLSS ran a little competition for all their fundraisers where they deducted a second from your finishing time for every pound raised – and I won, so many thanks to everyone who supported me. There was no danger of me swimming more than one lap so I won’t be asking for any more!

As for the swim, I think I earned the money. It was apparently the roughest conditions they’ve had in many years and we all struggled with the waves. The approximate distance is four miles and it took me just over 90 minutes to complete.

On the ferry coming over they told us the water temperature was a chilly 14 or 15 degrees, which made me nervous, as I’m not the biggest fan of cool conditions. Luckily it turned out to be a much more civilised 19 degrees. As I’m a bit of a wimp about the cold I decided to wait on the beach for the last possible moment to minimise any hanging around in the water. However, I misjudged it and was still standing there without my goggles on when the start signal sounded and ended up somewhere near the back. The good thing about this was that it gave me plenty of people to follow and try to overtake as we went around.

Fortunately for me we swam around clockwise and I usually breathe to the left so that meant I got good views of the island. It also meant I was turning my head away from the incoming waves so I had an easier time with the waves than some of the other swimmers. The swim start is timed to coincide with the change in the tide so you get a boost from the current, and this was really noticeable in parts.

The half-way point is clearly marked by Pottery Pier. This was a welcome sight as the swim was supposed to get easier after here and it was around this stage I stopped noticing I was cold. However, as with many swims, it’s difficult to know exactly where you are. For a long while I kept thinking the finish must be around the next corner only to find that it wasn’t. Eventually I was feeling hungry so stopped to have an energy gel but it was too late to make any difference as the finish really was around the next corner at that point.

Safety at the swim was managed by the Poole Lifeguards and they did a fantastic job. There was always a kayaker nearby and in many places the water was shallow enough to stand so it felt like a safe swim despite the slightly challenging conditions. On the second half, the water was calmer and perhaps a little warmer, which made for a nice finish. Even better, we were offered a cup of hot tomato soup and a crusty roll to help us rewarm as soon as we’d cleared the water.

I ended up 12th overall and the second non-wetsuit finisher behind Oliver Wilkinson (five-time winner and also winner of many BLDSA events and Manhattan Island record holder), so it was a good day all round.

If you want to sign up for next year’s swim (which I’d recommend), it’s best to subscribe to the Brownsea Swim mailing list to be notified when entries open. It fills up within a few minutes so you’ll need to be quick. The total distance is about 4 miles (6.5km) and Brownsea Island is a lovely place to bring your friends and family. 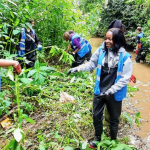