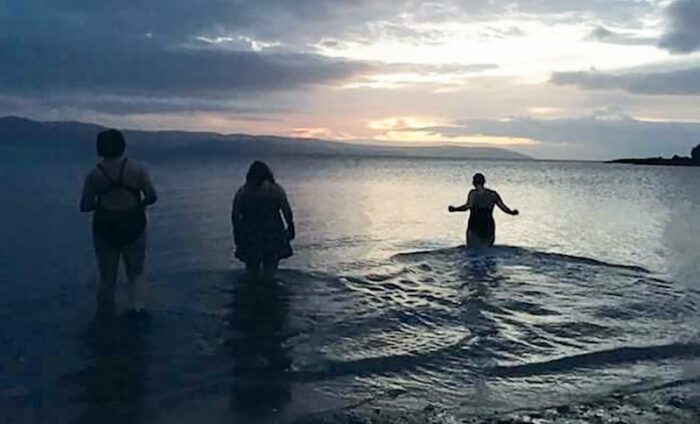 Karen Murphy celebrates one year of the Carradale Wild Swimmers

Some days when you swim with the Carradale Wild Swimmers at sunrise it’s not just the cold water that makes you gasp, what really takes your breath away is the view across the Kilbrannon Sound to the sun rising over the island of Arran. Like the molten core of a volcano poured over the land the emerging light reveals snow dusted hills and a clarity of light that is reflected in the blue of the water. Swimming here is a privilege and a passion for the open water swimming group started in December 2016 by dryrobe doyenne Emma and travelling towelrobe wearer Kirsty.

The group knows wild swimming in the west coast of Scotland isn’t always that idyllic. Their home water, the wee Torrisdale Bay is wedged between Carradale Bay and Saddell Bay which was made famous by Paul McCartney’s video of his song ‘Mull of Kintyre’. On damp, dreich days swimming in ‘the mists rolling in from the sea’ it is eerily quiet with dark clouds overhead hindering the light. However, even those mornings lift the soul as seals, attracted to the chatter and laughter, are drawn into the spirit of the place and swim so close it is hard to tell a seal’s head from a swimmer’s hat.

If the views across to Arran continue to be marred by rain or mist you can tread water and look to the land. Peeking through the trees is Torrisdale Castle and it’s not hard to visualise further up the glen the Beinn an Turc distillery and the botanicals in the walled garden which produce the fine Kintyre Gin. The wild swimmers toasted their anniversary with a cocktail concocted by a group member in homage to this special place.

There was a cake for the event too romantically depicting our perfect swimming scene but diplomatically failing to show the winter storm waves that have the dual purpose of rearranging the beach and providing a bodyscrub which rivals that provided by any spa. These times, in the wind and rain when the burn is in spate, the starfish and jellies are hidden by the peaty leafmould carried under the bridge past the otters’ holt. The sea is dark and mysterious and the swimmers are watched by cormorants drying their wings on the rocks.

In contrast, the summer brings the occasional sight of a solitary yacht anchored in the bay. Their hoisted red ensign acts like a red rag to a bull as the swimmers debate the possibility of reaching the boat and invoking the ancient maritime tradition that decrees this feat be rewarded by being supplied breakfast. The laughter and shrieking carries across the water and must spoil the isolation for those on board.

It’s an equal opportunity group, wetsuits, swimsuits, front crawl, breaststroke or a wild screaming dip and a dunk. It doesn’t matter who or what you are as long as you are there. Floating in the salt water, suspended in time, more aware of your surroundings and the boundary of your body than ever. Most days the goodbyes are hurried, as the cares and everyday lives that were gently unravelled in the water are picked up again. Sometimes though there are hot drinks, bonfires and friends waiting on the beach, grounding the swimmers’ experience and linking the land to the sea. Join us… 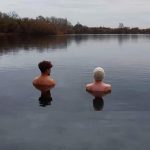 The long-term impact of lockdown on pool swimming