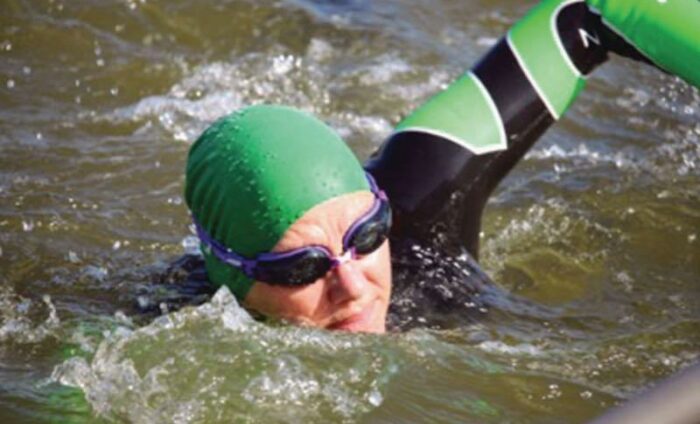 My swim story began in September 2015. Three months earlier my daughter had died suddenly and traumatically. On what would have been her 35th birthday my family took part in the Gower Fancy Dress Sprint Triathlon in relay teams. I, squeezed into my daughter’s wetsuit, did the ‘swim leg’ in one of those teams.

I had a big shock. I had been a swimmer nearly my whole life and considered myself competent, not a beginner. But on that day I thought I would drown! One minute into the swim and I couldn’t breathe and didn’t seem to be able to move my arms and legs. I seemed to have lost the ability to swim.

A most unpleasant surprise

I should, of course, have practised swimming in a wetsuit in cold water before turning up on the day – but I hadn’t and the restrictions and buoyancy of a wetsuit came as a most unpleasant surprise.

I thought I was suffocating, choking and encased in a strait-jacket. My legs floated to the surface and I was unable to kick properly. The seawater came towards me in great waves just as I opened my mouth to breathe. All of this led me to feel “I’m not going to make it”. I was in panic. I was frightened I would let my team down and all I could think was just keep swimming. “Just Keep Swimming” is Dory’s motto in Finding Nemo. The little fish may not always know where she is, but she can always keep moving forward.

That day I found a challenge, a purpose, something to focus on for the future. It felt to me, as I floundered my way round the buoys, that my daughter was with me cheering me on – and beaming with pride when I completed it. And it continues to feel that way every time I swim in the sea.

In 2017 I retired from work and decided to take up open water swimming as my new occupation. My aim is to swim the south coast of Britain by the time I am 70 (I’m currently 64 so you get an idea of how ambulatory my progress might be). I am not in a rush to complete this challenge and I am not setting about it in a systematic or planned way. As and when an opportunity arises to visit family or friends or enter an event or go off on an exploratory jaunt, I decided I would also plan to include a swim.

A surge of exhilaration

This could have become purely a warm weather pursuit. However, on 1 January 2017 I was persuaded to sign up for the ‘New Year’s Day Dip’ at Clevedon Marine Lake. The marine lake (re-opened in 2016) is a fantastic local community resource. There were lots of people there that day and a lovely festive and fun atmosphere. Some people were in fancy dress. Others were trying to swim ‘properly’. Most were just pleased if they could get in at all. I jumped in (and quite soon afterwards jumped out again) and felt a surge of exhilaration. I felt energised and invigorated and laughed and laughed. It brought happiness and joy into that grey cold day and I wanted to do it all over again. I also met a new group of people who also wanted to swim outdoors all year round and who have been incredibly supportive, encouraging, informative and friendly. That sense of achievement; the hot drink; the camaraderie; the laughter; the celebration – and the cake – that’s what keeps me going back for more.

Join the We Remember Them Relay and support frontline workers