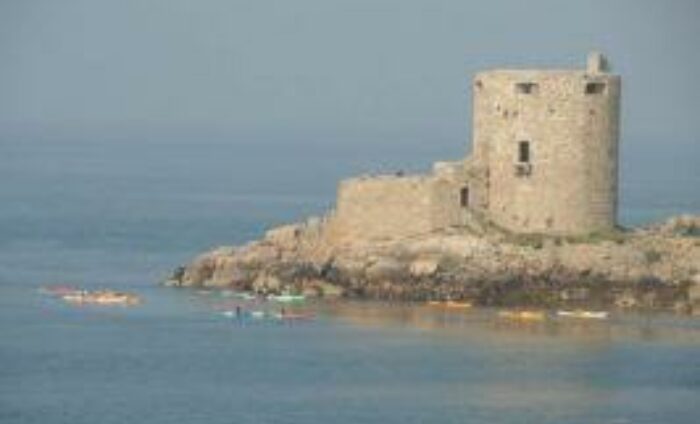 Lou Walker took part in the first-ever 15k Scilly Swim Challenge in September 2014 – and she’d whole-heartedly recommend it, but only to experienced and well-prepared swimmers. Read her story to find out why.

The Scilly Swim Challenge happened for the first time in September 2014 but is already set to be an epic ‘be ready at your computer when entries open’ event.
The event is a challenge not a race – there are no timing chips, finish times or prizes. The deal is you swim from island to island in six swims totalling 10 miles. In between each swim you walk across each island to the next swim start. We made quite a sight: 150 bedraggled neoprene- and Dryrobe-clad swimmers trudging along the lanes carrying our rucksacks.
The longest swim is 4.8k but this becomes 5.8k when you don’t stop after the previous 1k swim – you just land on a sandbar, walk over the top and back in on the other side. The shortest swim is 800m; the other three are each 3-4k.
So why is it going to be so popular?

I love sea swimming and knew the Scilly Isles were glorious so entered as soon as I found out about the event. I trained hard all summer so I could enjoy the swims without feeling anxious about the distance. Then, two months before the event, an email mentioned the water temperature would be 14 degrees Celsius.
14!? How can the water around these islands bathed by the Gulf Stream and known for their subtropical climate have 14-degree water in September?
I don’t know, but further research confirmed that the water could, and probably would, be 14 degrees.
I swim without a wetsuit so this was an issue.  I started swimming in an icy spring-fed river to try to acclimatise to water that’s colder than the UK’s south coast. I did hard sessions to get me fit enough to swim hard for long periods to stay warm. Every week I did a key long-distance training swim of four rounds of one hour in, one hour out.
The Scilly water really was cold. For a dip or short swim it would have been refreshing, but for five plus hours of skins swimming it was daunting. So how did it go?
After the first swim (3k against the tide, fog, no sun) I knew it would be ok, as long as I could swim hard for all of it. And it was ok, especially on the second swim when the sun came out and you could feel its heat when you got out of the water. I definitely got cold, but my hand only started to claw once and kicking hard every now and again stopped me getting too cold.  The 800m swim was lusciously delicious, helped by knowing it was a short swim, the sun was out and I was toasty warm at the start. Stress makes you feel the cold more so warm, happy thoughts are good.

But The Long Swim was looming. We all felt it.  5.8k in deep water that wouldn’t have been warmed by the sun. Some skins swimmers opted for wetsuits. Some swimmers opted not to do it at all (it’s not a race so you could get in and out as you pleased).  I had a wobble when, standing on Samson’s glorious Caribbean-esque  sand spit after the first 1k from Bryher, we were stopped from jumping straight in again and setting off for St Agnes, 4.8k away. It doesn’t take much to get too cold in these circumstances so I sheltered behind some lovely wetsuited people and tried to think warm thoughts.
The long swim finished quite a few people off. The tide was with us but the sea became a bit confused and lumpy. The huge variance in swim speed meant the kayak support thinned out so I wasn’t always sure I was going in the right direction (I wasn’t). When I arrived my beloved Dryrobe was still out on a boat that was scooping up cold swimmers (but a lovely local lady leant me extra towels and blankets – there were other similar stories of such kindness).
Having completed a tough, long, cold swim many people opted not to do the last leg, so a depleted number of swimmers set off for a supposedly short and straight-forward 3.4k on a slack tide.  I was relaxed, knowing it was the last swim. I’d conquered the Long One and felt confident I could keep moving fast enough not to let the cold set in.  So after about an hour I was mentally a bit switched off and didn’t click that I wasn’t moving. Then a kayaker pointed out we were in a ‘bad current’ and I got a taste of how it feels to be a knackered Channel swimmer being told they have to swim as hard as they can to get through the French current.  One strong, experienced swimmer said he only managed 200m in 30 mins. The kayakers afterwards said it was hard to hold position.
I’m just glad I was fit enough to keep swimming hard enough to inch my way round the point and out of the current. Some climbed out onto the rocks and were scooped up by rescue boats (and dropped back in in the home bay out of the tide). Others got out altogether, scrambled up the cliff and jogged home.
I worked hard to push threatening cramp, cold and fear to the back of my mind in that last swim.  I could have given up but that wouldn’t have helped – I’d still have been freezing cold in the sea, being pushed backwards.  I could have got out onto the rocks, but I’d still have been courting hypothermia until one of the busy rescue boats could come to get me.  Better to keep swimming.
There was just one thing on my mind when I staggered up the beach at the end. My Dryrobe. Followed by tea and my bed.  I was warm again by about 10pm.
To anyone thinking of doing it next year, I’d say you really need to take it seriously because it’s probably the toughest swimming challenge you can do without some sort of qualifier or proven track record.

So would I do it again? No.  It was incredibly tough.  We were very lucky with hot sun and calm water for most of the day. As a skins swimmer, any rain, wind or cooler air temperatures might have made the cold insurmountable.  I’m a strong swimmer and relatively experienced in the sea. I trained hard and the summery conditions helped but I still feel we were lucky on the day.  Would I recommend the event to others? Hell yes – as long as you’re prepared.
But I will definitely go back as a volunteer for the race organisers or as support for swimming friends, no question.  I am a devoted Scilly Girl now.
More info and pics on www.scillyswimchallenge.co.uk and www.facebook.com/scillyswim

“Everything is a more difficult than I imagined.”