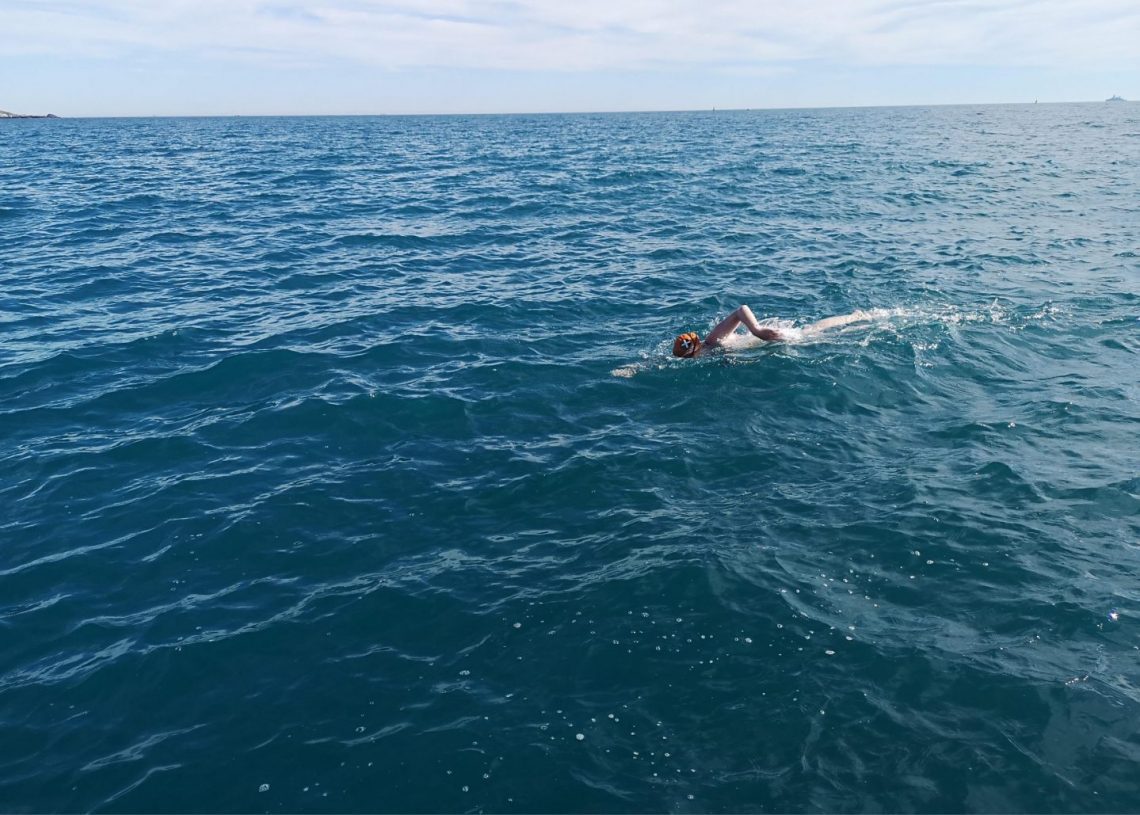 Lowenna North, a 15-year-old swimmer from Cornwall, has become the youngest person to complete the 14-mile Eddystone to Plymouth swim challenge.

Setting off from Eddystone Rock on Monday 11 July, Lowenna completed the swim challenge in 11 hours, 31 minutes and five seconds, arriving at the steps next to Tinside Lido in Plymouth around 19:30 BST.

The gruelling swim begins at Eddystone Lighthouse, which is approximately 13.7 miles from Plymouth Hoe as the crow flies. Only four people have completed the challenge since it was first swam more than 100 years ago.

Neil Brinkworth from Plymouth was the last swimmer to complete the course; he was the official observer for Lowenna’s swim and will submit details to the Marathon Swimmers Federation for ratification.

Lowenna swam a total distance of 16.28 miles (26.2km) because of deviations from being blown off course. “This is an incredibly complex swim due to a number of challenges,” says Andrew Butler, an endurance swimmer who was part of Lowenna’s support crew. “You are at the mercy of the weather Gods and tidal conditions, and when you swim back to Plymouth you have to swim across the tide.”

Plymouth being a busy Naval and commercial port causes further logistical challenges. Pilots have to navigate across shipping lanes. “These aspects make it a potentially dangerous swim, which only experienced endurance swimmers should attempt,” says Andrew. “We train for months, sometimes years. It is psychologically and physically demanding. You also need an experienced crew for support.”

At the mercy of the tide

Conditions were challenging from the onset with increasing winds creating chop, which blew Lowenna sideways. The Cornish teenager also had the wind pushing her in the same direction as the tide, towards Looe, meaning the boat had to steer towards the Mewstone to compensate.

“This all extended the swim distance,” says Andrew. “Lowenna also had to battle with choppy seas for the majority of the swim. When she eventually arrived at the shelter of Plymouth breakwater, she then had to battle against the outgoing tide, which any experienced swimmer will testify is brutally challenging and often finishes a swim.”

“I woke up excited to begin the swim,” says Lowenna. “I felt relaxed and calm on the journey to the marina. The trip out to Eddystone was also chilled and relaxed. I was full of excitement and ready to start.”

The boat had a lift to lower her into the water, and it was only once she entered the water that the nerves kicked in. “The sea state was worse than I expected and made it tougher,” she says. “The feeds went well but I was mindful that I had to get swimming again.”

“The third and fourth hours were psychologically hard with a few jellyfish stings and a bit of sickness. Physically, around the eighth and ninth hours were tough and I didn’t think that I was making much progress.”

Lowenna has been training for two years for the swim challenge, which was originally planned for 2021 before being postponed due to poor weather. Through the winter, she swam three times a week before school, once a week in an endless pool and once a week with her swim club. She also did Pilates once a week. “As the water warmed up, I started to increase my swim times until I did my six-hour swim a month before my swim.”

Even though it was more challenging than expected, the Eddystone to Plymouth swim has bolstered Lowenna’s confidence and her determination to train for future swim challenges.

“Physically I am fine apart from the sunburn. Despite applying plenty of protection, it was a very warm day,” she says. “I am already excited for my next challenge, which is the English Channel in 2024. I feel so much more confident and ready to take on future challenges now.”

It’s been quite a week for swimming challenges! Read about other ambitious challenges on our news page, from a new North Channel record to an epic By Jo Tinsley

If you want to swim more, swim slower