Erwin Ruijsink was part of a team that conceived, planned and executed two crossings of the Curaçao channel between the main island of Curaçao and Klein (or Little) Curaçao, in the Dutch Caribbean.
At the end of 2013 a colleague of mine, Andre Nottelman, working as an instructor at the Dutch Caribbean Coastguard (DCCG), was preparing for a long swim. He was training for a Curaçao channel crossing with another colleague, Wim Sonmeveld, who was supporting him on a kayak. However, because of the prolonged windy season his window of opportunity closed for any attempt in 2013.
I had once had the idea to do the crossing between the two islands of Curaçao and Klein Curaçao but never measured the distance so it had remained only an idea. However, after talking to Andre about his swimming plans I suggested to start training and join him and Wim for another attempt in 2014.
In my youth I was a fanatic swimmer at national level but I always preferred short sprints over long distances. But since I’ve been living on Curacao, a lovely Caribbean island just north of Venezuela, I began to appreciate open water swimming. I work here as Head of the Rescue Coordination Centre of the DCCG on Curacao.
Our preparations went according to plan but the windy season continued until August, which is longer than normal. During our training another marathon swimmer from the island, Niko Kluyver, joined us. We did a few workouts together, up to 11km, escorted by Wim on his kayak.
In September this year the first weather window opened. The winds declined and the sea state dropped, providing a good swimming opportunity. Unfortunately I became ill a week before, suffering from Chikungunya (a tropical disease). Andre and Niko went ahead and did the crossing anyway, escorted by a Fast Interceptor of the Royal Dutch Marine core. The crossing was also escorted by a local FINA official, Gladwin de Lanoi. They covered 26km in about ten hours from Klein Curacao to the first hotel on the island.
After my recovery I picked up my training schedule again, which was mostly deriving from H2Open Magazine! At the end of October a new window opened. My first attempt failed due to a breakdown of the civil support boat. Four days later, again with support of the Royal Dutch Marines and a FINA official, I finally succeeded. I chose the shortest crossing from land to land, about 13km. It took me 3 hours and 36min.
Both crossings were done according to Marathon Swimming Federation (MDF) rules with an observer and appear to be the first official tandem and solo crossings. There have been two or three earlier crossings but not under MSF rules.
To my surprise our swim has been nominated by WOWSA as performance swim of the year.
Currently we’re making plans for circumnavigating Klein Bonaire (the island next to Curacao), a swim in shallow waters on top of turtles, fish and coral. 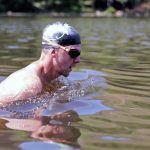 Swimming with the Sharks