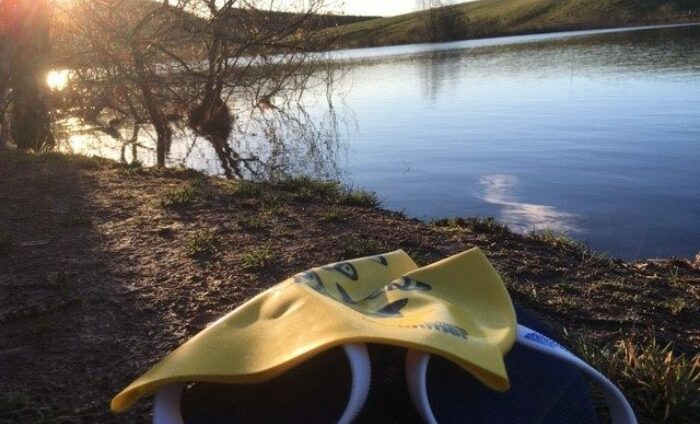 I have to admit that for me this is the coldest water I have ever swum in. My hands were hurting so badly for at least 5 minutes after I got out of the water and it wasn’t, at around 6 degrees C, even officially ice swimming! I should thank the Outdoor Swimmer crew and the open water community that I have become part of for the encouragement to keep going but I also really don’t want to stop writing this.

Having had a suggestion from one of the Wild Swimming Borders group, I couldn’t resist in a wee bit of a homecoming (huge clue there on where I was). So last Sunday morning I drove to the ‘secret’ meeting location with one of my swimming buddies, Creag, to be met with a very welcoming smile, a short but tricky country road drive and then more happy greetings. It was exciting to be on my first swim led by others to a place I had never visited before.

Once we reached the small beach area by the water’s edge I could see the beautiful loch surrounded by the lowland hills and fields. I often ask myself why you wouldn’t want to get in, although my wife often finds it easy enough to point out several reasons. If you know, you know, right? And if you don’t, it’s a shame.

Anyway, I was the last in, so I tried to be brave and not take too long. I was keen to get to the little duck already bobbing about (one of those that parents use to make sure their children are safe at bath time), to see just how cold it was. Yes, I had my wetsuit on, but no boots and my gloves are almost ineffective (I really must review them). During my last year or so of training I believe I discovered that eating more protein keeps me warmer. Who knows whether this is accurate or just a mental boost but whatever works as far as I’m concerned. I think I might have forgotten to eat my protein breakfast on this Sunday…sigh.

Some people sniff at wetsuits. I realise that I am a head-up breaststroke sniffer. Or used to be. There was no way I was going to be crawling up the loch, so I swallowed my sniffing and kept my head well above the water. Now I get why the woolly and oftentimes colourful hats are so important.

Many bodies of water seem to be shrouded in mystery and folklore from days gone by and this is no exception. This faerie location has tales of a kelpie type water bull haunting the cool waters ready to take you to another world. It is said you can hear the roar of the water bull coming from the depths beneath you. I saw a few cows and said hello to a couple of people walking their dogs but was sadly (or luckily) not visited by the fearsome beast. This water kye (cattle) has been written about since at least the early 1830s when Sir Walter Scott took Washington Irving there for a visit. The stories continued throughout that century about the water bull with varied sightings across the country although not including any direct interactions with the humans involved. Maybe we scared them off, and on Sunday it must have been the expletives at the temperature that did it!

I’m proud to say I managed the cool waters for about 15 minutes. It was invigorating to push out into the loch past the trees in the early morning sunshine.

There were two things special about this swim for me. The location being close to my birthplace and the generosity of spirit from my fellow swimmers that day. The openness of other swimmers never fails…and the mince pies were very welcome.

Thank you to Maureen, Helen and Lynda of the Wild Swimming Borders group it was a real pleasure to share one of your favourite swimming spots with you.

My spot this time was Cauldshiels Loch in Selkirk in the Borders of Scotland, close to Galashiels. You really need to drive to get there and go either via the A7 or the A68, from north or south. If you come via the A68 then you need to turn on to the A6091 towards Melrose and Tweedbank. From either direction head for the Borders General Hospital which is on the A6091. When you turn in to get to the hospital go straight on past the entrance and you will see a creche a short distance ahead on your left. Carry on straight up the road. This is the narrow, winding country road so be alive to oncoming traffic and passing places. Drive for approximately a mile to a small parking spot on your left. You then walk up the track to your left for about 10 minutes, pass through a walking gate (signed by the walker’s route) and after a couple of minutes you will reach the small beach area with a very handy bench on your left. This is part of the Borders Abbeys Way so you can always take some time to enjoy the views from land.

If you want to suggest somewhere for Kate to swim next, you can contact her on k.gillwood4@gmail.com 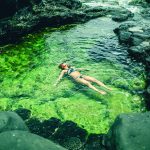 How good a swimmer are you? Try our fun test