Event director Mike Morris sent us his report from the 2020 edition of the Exmoor Swim, one of the few open water swimming events that was able to go ahead this year.

It was always going to be touch and go whether the Exmoor Open Water Swim could go ahead this year. Even in the final week before the event, changes in government policy pertaining to Covid19 meant the decision to proceed was in the balance. But go ahead it did, and what an event! More than 500 people took to the water on a glorious sunny blue sky day. From 12 year olds to 70 year olds, swimmers descended on the stunning Wimbleball Lake – all mindful of the new social distancing policy in place that included a massive one way system around the lake, a rolling start, face coverings in the bag drop area, zoom briefings and no prize giving. It was extra work, but it meant people could participate in this event, while being confident of their safety. It was also decided to promote the non-competitive nature of the event, and we awarded prizes randomly, which proved very popular with participants.

Nevertheless, there were some impressive swims. Claire Hann (Bristol) took not only first place in the women’s 6km in a time of 1 hour 24 mins, but was also the fastest to complete the course, beating the first male, Soren Mikkelson (Bristol) by almost a minute. Claire, a pro triathlete says: “ I didn’t mind the rolling start as I could just concentrate on my own race. I loved the course, but the back straight was a bit choppy!”

The first skins swimmer (non-wetsuit wearer) across the line was Sian Pearson (female, from Taunton) beating the second skins by a massive 14 minutes.

In the 4km event, Martin Saunders from Torquay took first place in 54 mins 44 sec. “The second lap was definitely tougher than the first, but it was an enjoyable event,” he says. “It was extremely well organized, and ran smoothly considering the pandemic situation.” The first female in the 4km was Charlotte Jessop, closely followed by a notable performance from up and coming junior, Skye Pirie (age 16, Croyde).

Gold in the 2km was taken by supervet, 59 year-old Malcolm Greenslade, a swim instructor from Lyme Regis who managed to keep five under 16 year-olds at bay! First female was 14 year old Lottie Chesworth (Barnstaple).

Due to Covid19 we introduced a new 1km distance and a new course, which proved popular, with 68 people participating. Seasoned veteran of the Exmoor Event, 14 year-old Lucy Allix (Barnstaple) was fastest, knocking out the kilometre in 14 mins 48 seconds. First male over the line was Sebastian Beard.

We have been overwhelmed with the feedback from participants this year, and it is lovely to know how much people have appreciated us putting on this event in such difficult times. We are looking forward to 2021, and we may well keep some of the procedures that we have initiated for covid next year. We also really appreciate the support of our major sponsor Marsdens Devon Cottages, who have stuck with us through this difficult time. 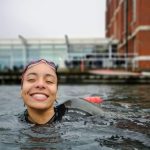