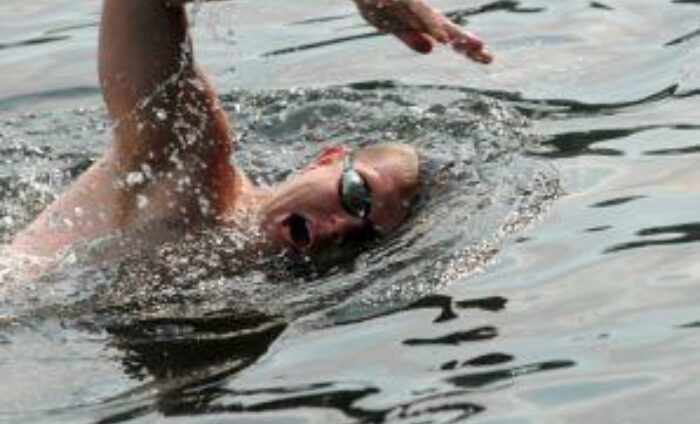 Ed Williams is a swimming teacher based in Cambridge and an extreme marathon swimmer. He’s aiming to take on one of the most difficult of marathon swims, the North Channel between Ireland and Scotland, which is notorious for its chilly water (often around 10 to 13 degrees Celsius), powerful currents, fickle weather and lion’s mane jellyfish. This is his story of how he let his fitness go and how he’s struggled to rebuild it.

On 14 August 2006 I completed my lifelong dream. At the tender age of 19 I swam solo across the English Channel. This 22 mile swim, considered by many as the hardest in the world, was what I dedicated my life to training for and suddenly all of that hard work had paid off. I remember saying to myself: “Never again!”  I got out of the water at Calais completely physically and mentally broken but with a huge sense of personal accomplishment.
After getting back to England I started feeling a sense of emptiness and meaningless. I had committed several hours a day to training for this and it had become such a huge part of my life but now it was over. What on earth was I to do with myself to fill that void?

Well I was young so I spent the next six years partying and getting fat. Last year I had a reality check: my doctor said I was obese! I could not believe my ears but was clearly in denial as I would get out of breath walking up the stairs and the most exercise I got was opening the fridge. In my mind I was still a strapping channel swimmer with a six-pack and hoards of admirers but somehow that person had vanished. I was determined to get him back so I decided it was time to get fit again.

I had tried getting fit again in the past but without a goal I found it very difficult. Weight loss and fitness alone is not enough to inspire me so I needed to find something bigger than the English Channel to work towards. I know people who have done double crossings but it just didn’t appeal to me on a logical level to finish where you start. I needed a step up.  That is when I decided to train to swim the North Channel between Scotland and Ireland.
In my naive state I thought it would be a doddle. It is the same distance as the English Channel after all and once you have swum the English Channel you do carry a sense of invincibility wherever you go. You feel like you can take on anything. I soon realised however that my preconceptions were not quite accurate.
Firstly, the North Channel is much colder. It will be between 10 and 12 degrees when I swim it in August 2014 so acclimatisation will be a big part of my training. Acclimatisation is essential to a successful channel swim. People often ask me if the grease keeps you warm. The answer is no. It is there to stop you chafing and although it will provide a little insulation, if you don’t put in the cold water training in advance you will suffer.
The distance does not concern me as much at this stage. I’ve put in a lot of miles in the pool and also do a lot of strength and conditioning training. As a swim coach I work with a lot of people to achieve their Channel swimming ambitions and one thing I always say to them is to remember the old tale of the tortoise and the hare. As long as I plod and have a good stamina base I will make the distance. Many people have failed on Channel swims by going out too fast and getting tired whereas I tend to stick to two miles per hour and can maintain that without much trouble.  That is my key to success with distance swims.
What does scare me is the marine life, in particular the dreaded lion’s main jellyfish which can grow to be bigger in diameter than I am tall. That’s a huge animal to bump in to and my understanding is that it packs quite a punch in its sting. I will be swimming in speedos so will be taking the full brunt of those stings and that does worry me a great deal. I have clocked up thousands of hours in the ocean but to this day have not been stung. I sense my run of good luck in this area will come to an end with the North Channel.
The North Sea is also famous for its basking sharks. They are often described as the gentle giants of the sea and I have been assured they won’t bite. That’s all very well but if I come face to face with a giant fearsome-looking shark in my heat deprived state then I will be quite scared. I have had encounters with sharks in the past in warmer seas when I have been on my own and regardless of the species they still send a chill down my spine.
It is however a combination of all of these obstacles that keep me coming back for more and always trying to find that next big swim. Anyone can be ordinary in life but I have always wanted to do amazing things and my way of expressing that is to swim to inspire others.  The feeling of accomplishment after swimming between two points that most people could not even comprehend is what I love. The adrenaline rush of getting out and knowing that all the training has paid off is very addictive and I can see myself doing these extreme swims for years to come.
As well as training for the North Channel and running a busy swim school, I also tour schools every week to speak with the children about the importance of having a dream and to never give up. Let’s hope that my North Channel swim can add a whole new level to the ways in which I can inspire them next time.

Why does swimming in cold water make you feel good