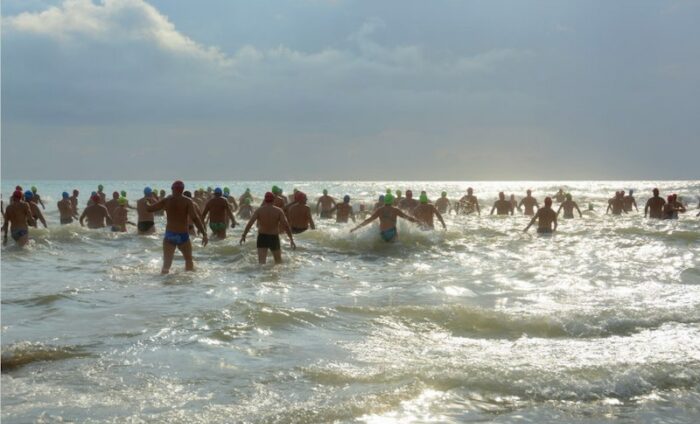 Raucous waves roll against the harbour wall on a surprisingly grey August day; voices of 300 excited Spanish swimmers rise above the wind as they stand on the beach, preparing to navigate 2600m around the harbour wall and across the port of Gandía.
The competitors’ bright costumes and enthusiastic energy are inspiring. Swimmers’ bodies come in all shapes and sizes: tall and slim; small and round; triangular; pear-shaped; heart-shaped bottoms; no discernable bottom; bottomless bottoms. Men’s chests are shaved, muscles are liberally oiled. Some let it all hang out – there is no judgement – all swimmers are equal in the water. Hat colour denotes age category, bringing to mind the film Logan’s Run. Sanctuary is to be found in training and fitness. The sun promptly emerges, transforming the mullish grey sea into a scintillating mundo maravilloso. A man with a megaphone announces the start and they’re off, running and splashing in to the shimmering water. John is in there somewhere, but he’s just another swimming hat and pair of arms, pulling against the animated sea.

We’re in Gandía, on the Costa de Alhazar, 65 kilometres south of Valencia, the home of the oldest sea ‘travesía’ (crossing) in Spain. The first of today’s races is the sixteenth ‘Volta a L’Escullera’, renamed in its ninth year as the ‘Pitet’ Memorial, in memory of José María Ángel Pitet who helped found the ‘travesias’. Pitet also helped to revive swim races after the Spanish Civil War and worked for 50 years to improve and promote swimming in Spain. This swim is a crossing of 2600m from the beach to the historic market in the port. The port was built by the British in the 19th century to serve the textile industry.

Swimmers' bodies come in all shapes and sizes. There is no judgement – all swimmers are equal in the water

From my vantage point up on the ancient harbour wall I spot the first swimmer enter the port, propelling himself rhythmically like a bluefin tuna past fishing boats and the huge numbered red doors of the warehouse arches. A large crowd is gathered at the finishing line. The conquistador is a local boy, 25-year-old Joan Muñoz Giner, who completes the course in 34.33 minutes, two minutes and 20 seconds ahead of his nearest rival, Jonas Marin Gomez. The first woman, Eliana Krist Sotelo Reynoso, comes in seventh with a very healthy 37.38 minutes.The second woman, Paula Lopez Cediel from Malvar, in the 15-19 year category comes in twelfth, her time of 38.25 minutes revealing the power of youth.

Gradually the rest of the swimmers climb out in ones, twos and bunches, some bouncing up the slope with big smiles, others dragging themselves ashore like tired seals. All are loudly cheered home by the enthusiastic harbour-side throng, receiving healthy watermelon, bananas and water from cheerful volunteers.

The antidote to doing nothing

I ask John about the event. What made you want to take part in the race? ‘I enjoy long-distance swimming and was fascinated by the the history of the swim. As I was on holiday, not far from Gandía, it seemed the perfect antidote to doing absolutely nothing at all.’ What keeps you going on a long swim like this? ‘I like to imagine I’m the protagonist in a novel or a film. After seeing the old fish warehouses by the harbour, I fancied I was Mack in John Steinbeck’s Cannery Row. Mack had “. . . no ambitions beyond food, drink, and contentment”. I assumed I could get all three when I finished the race.’ What was the highlight/worst part of the race? ‘The best bit was when I got round the harbour wall and bodysurfed down a huge swell into the port. I felt like a dolphin riding the perfect wave. I then realised the swell and the thrill ended as soon as we entered the harbour. We still had a long way to swim.’ What did you think of the atmosphere before the race? ‘I loved the colourful swimming costumes. No-one was smoking, which is a novel sight in Spain. Times have changed.’

The second 850m swim of the day is the LXV Travessia al Port de Gandía. The first race was in 1931 and is named after its founder, journalist, sportsman and anarchist Damià Català. Born in Gandía in 1909, Damià went to Barcelona to study medicine and joined the university swimming society. He founded the Gandía Swimming Club in 1930. Damià took part in the Spanish Civil War on the side of the Republicans. At the end of the war he was detained by Franco’s forces and exiled to France. The swimming event didn’t take place for another 20 years. It has been a regular feature of Gandía life since Damià returned to Spain in 1972.

No one was smoking, which is a novel sight in Spain. Times have changed

Jose Manuel Metola is the current secretary of the Club Nautico, which organises the event. He’s been volunteering for 15 years: “The long race has grown from 200 to 300+ participants. In Spain amongst people aged 40-60 there’s been a huge growth in sport. Women have taken part in the race since 1933.”

Cecilia Estremera Martinez, 38, took part in the long swim for the first time. She had taken part in the short swim regularly from the age of seven to 14. “The sea was very choppy today and I didn’t think I would enjoy the race, especially as there are no buoys to tell you where to go. Once I got inside the port though I could see all the people waving and cheering which was very encouraging. I’ve always swum. I like to do triathlons, but my favourite part is the swimming. The events are very popular on the Mediterranean coast.”

The short race, 850m from one end of the port to the other, takes place at 11.30. It’s more of a family affair. The elite swimmers are joined by numerous animated children, their race numbers written in felt-tip on their arms and their hats. The atmosphere is friendly and buoyant. Swimmers set off in waves according to their age in a sea of blue, green or pink caps. White-crested children go in last, plopping like baby penguins into the sea one by one.

Rafa Lopez Forcano, nine, took part for the first time last year and won a prize for being the youngest swimmer. His mother told me that he has been swimming since he was three years old: ‘It was important for us that he should swim. We thought swimming would be the best sport for him, so we sent him to lessons.’ At the end of the race Rafa told me: ‘The swim is difficult because the harbour is very big and it’s hard to orientate yourself. I like swimming though, my weight doesn’t hinder me.’ 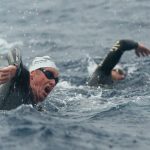