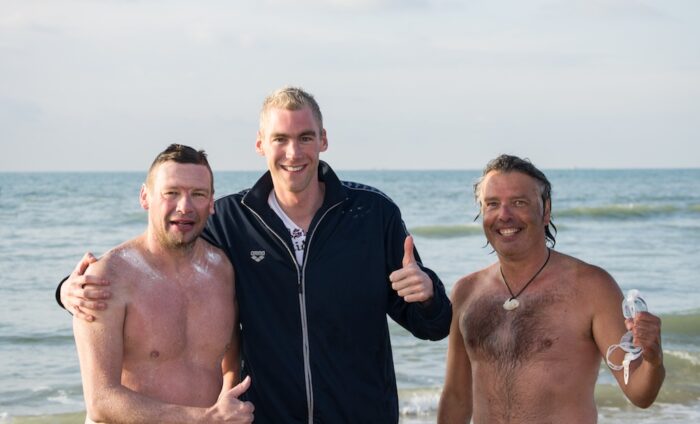 Belgian swimmer Jean-Luc Piens says he would never have completed his English Channel crossing without the support and guidance of his country’s top open water swimmer, Brian Ryckeman.

In 2012 I put everything in place for a project that had been on my mind for some time – swimming the English Channel for charity. I took all the steps required to satisfy the application criteria of the Channel Swimming Association (CSA) and then I started my training.
After a while it became very clear to me that just going to the pool and swimming for a few hours was not going to be enough to prepare me for this enormous challenge. It was then that I, quite unexpectedly, received the details of our Belgian number-one open water swimmer Brian Ryckeman. I called him and we fixed up a meeting.

One day after that meeting he sent me my complete training schema for the following days, and so my adventure truly began. Besides providing me with my training plan, Brian continued to work on his own swimming career. In the 2013 World Championships he finished second in the 25km open water swim, less than a second behind Thomas Lurz of Germany. A few weeks later he won the 36km Capri-Naples (Italy) contest in an amazing time of 6 hours and 13 minutes, beating the race record by 16 minutes.

Not only has Brian assisted me a lot in building my swimming skills (I had never swum competitively nor had I been a member of a swimming club), he helped me prepare both mentally and physically.

As part of the CSA qualification process I had to complete a six-hour test swim.

As an example of Brian’s support, during that swim he stood by the side of the lake monitoring my progress. When I was feeling cold he alerted my lifeguard that I needed to drink more to alleviate the problem. Without help like this I believe I would not have finished this test successfully and would’ve lost the chance to attempt my goal of swimming the Channel.

When the day came for my crossing we started at 3:30am from Samphire Hoe (Dover, UK) and my support team was in constant contact over the phone with Brian. He was so invaluable to my task that he was even able to reduce the time that I was seasick to just a few minutes by advising the team on the boat to change the composition of my sports drink. After 14 hours and 1 minute swimming, we landed on the beach of Wissant in France. My family were already there to greet me and, of course, Brian and his coach Rik Valcke. It was a really great and emotional moment. I really feel that we made that swim as a team! I am incredibly grateful to Brian, who is not only a great coach but also a fantastic person.

Diary of a wandering swimmer – imported sand, piscinas naturales and a pool to myself 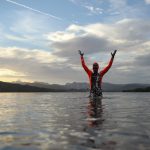