I was always a pool swimmer as a child, representing my school and the south of England as a teenager. Though in my twenties, I lost touch with the water and only rediscovered it again in my late thirties. Soon after returning, I grew bored of the pool and longed for something better than 25m of chlorine, so I entered the Great North Swim in Windermere for the first time in 2011 – full wetsuit, gloves booties and panicked. I did all the things you are not supposed to do: not practicing and not swimming in open water before the event. Nevertheless, after making it round the mile course in 55 minutes, I was hooked!

In 2012 I did the Great North Swim for a second time, then in 2013 I did two one-mile swims and a 5k. At that stage I knew I needed to challenge myself and see what else I could achieve. So, in 2014, I did all five Great Swims across the country, and then progressed onto doing a 10k.

In 2016 I discovered swimming holidays with Strel Swimming and SwimQuest after hearing about other people’s experiences. Their stories really spurred me on to wonder what I could do. I have since swum 14.5k twice in Lake Annecy – once in a wetsuit and once without. It was a simply fantastic experience. To start in the dark and to see the sun rise over the mountains was magical.

But still, I wanted to swim even further distances. I swam Coniston and Ullswater end-to-end, then a colleague of mine suggested I should swim the Channel. I said: “No way! It’s salty sea water. Yuk!” Despite my response, I didn’t know it at the time, but the seed had been planted.

I eventually signed up for a Channel training week in 2019 in Croatia with the SwimQuest crew. I came back with some excellent friendships and a two-hour cold-water qualifier under my belt. I then found COSMIC on Facebook who were looking for Channel relay teams, and I decided to sign up. I couldn’t believe it, I was going to cross the Channel!

Then, six weeks after signing up, I was diagnosed with highly invasive breast cancer and all my hopes of swimming at all in 2019 went straight out of the window. I had surgeries, followed by six months of chemotherapy and then a month of radiotherapy. I stalked my teammates as they successfully crossed the Channel and I cried with frustration that I wasn’t there.

Just before the first lockdown this year, I was finally allowed to get back to work. I couldn’t so much as pick up a kettle, or drive properly, and I was tired. The lockdown saw me confined to home and so I bought a garden pool and began tethered swimming, and oh my what a fantastic physio and rehab that was. I did a two-way Channel crossing in that pool to raise money for the breast cancer charity at the hospital I was treated at and managed to raise £1100.

COSMIC allowed me to defer my crossing to this year and on 11 September this year, I finally swam the Channel. It was such an emotional journey for me considering I couldn’t even swim front crawl four months previously.

What have I taken away from the last two years? 2019 saw me at my most depressed and the weakest I have ever been. I may have had cancer, but it isn’t going to rule my life. Cancer is not going to control me. The human body is a fantastic piece of machinery and the only thing stopping you is you. I have learnt that if you push your boundaries, you will be surprised what you can achieve.

What’s your swim story? Email us at editor@outdoorswimmer.com 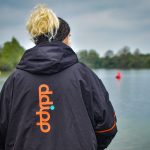