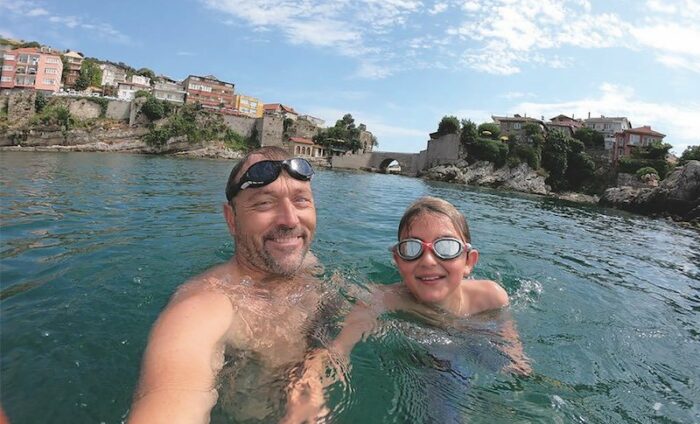 Simon and Clancy in Amasra, Turkey

I’m writing this overlooking the Black Sea near the Turkish city of Trabzon, which is located on the Silk Route and has been a melting pot of religions, languages and cultures over the centuries. I’ve just been swimming in the Black Sea. I’m currently over halfway through my road trip journey that began a few weeks ago in England and which will hopefully finish in Kazakhstan in another month’s time.

Along with my wife, Lou, and our two children, Clancy and Dixie, to date we have travelled through the European Lowlands before turning south into the Alps followed by Hungary, Romania, Bulgaria, and now currently in Turkey driving along the southern coast of the Black Sea. The border with Georgia, our next stop, lying at the intersection of Europe and Asia, is 180 miles northeast.

We have been camping on the roof of our car which makes it quick to setup and dismantle on each leg of our trip. In addition, our aim is to swim in open water on each day of the trip. So far we’ve enjoyed long sandy beaches on the North Sea in Belgium, let the river take the strain down the Rhine in Cologne and swum in stunning glacier fed lakes in the Austrian Alps. Some countries have been more of a struggle to find suitable swimming spots.

Romania has been one of them, mainly because of the route that we needed to take to get us to Bulgaria. One day, we were forced to swim in a murky dam which was a water source for the local power station and on another, all we could find was a small river where the depth was no more than knee height. However, these swimming lows have made the highs that much higher! Crossing the Danube between Romania and Bulgaria, traversing the Altausseer See, swimming in the fabled Hellespont and crossing to the island fortress of Amasra have all been highlights.

It was around nine months ago that we started formulating a plan to combine swimming with an overland trip. As if driving to Kazakhstan wasn’t enough with a ten and seven year old, we added the daily open water swimming challenge to both seek out open water swimming spots and to help us recharge our swimming mojo. So much so that the kids during the trip have been actively seeking out jellyfish on their own swim safaris and having competitions on who can fashion the most glamorous seaweed crown!

We’ve discovered and learnt things on the way too, such as Austrians really do wear Lederhosen and Dirndls, if you’re going to camp by a lake in Eastern Europe make sure you’ve got lots of insect repellent and that open water swimmers might be wired a bit differently, as the number of times we’ve been told that somewhere wasn’t a good swim spot, only to find that it really was!

It’s been a wonderful adventure and we’re looking forward to the next leg through the Caucasus, across the Caspian and onward into Central Asia. I’ll let you know how we get on in the next issue!

If you like the idea of pioneering adventure swimming holidays, check out swimtrek.com

Going to any length… A Sean Conway Interview