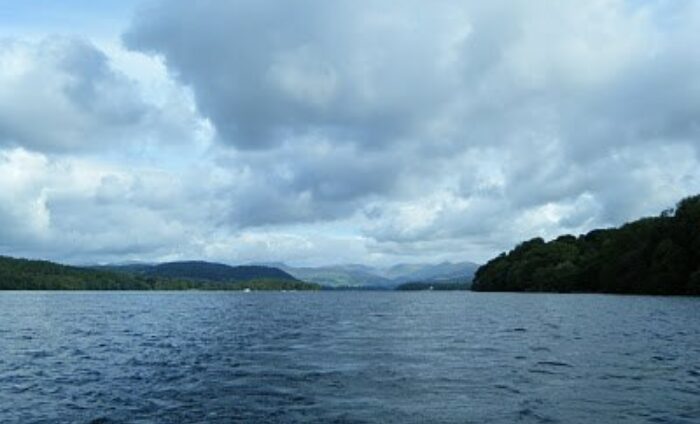 Lake Windermere features highly on many aspiring Channel Swimmer’s training to do lists but at 10.5 miles long it is a significant achievement in its own right. Mark Robson shares the story of his crossing in August 2010.

Rising at 6am on Wednesday 25th August after a reasonable nights sleep, the weather looked fantastic as I walked the dog, prior to the usual uncomfortable and dreaded forcing down of porridge.
This eating first thing on a morning lark never gets easier for me. The car was already packed with enough supplies to feed every living relative when Chris Pearson arrived (he was going to swim with me but in his wetsuit) and we left home 7am, aiming for Windermere.
By the time we got there my crew, in the shape of the ever jovial Sarah Tunnicliffe and our skipper for the day Mark ‘Pash’ Pashby had already arrived.
I had reserved an electric boat at Shepherds for a couple of reasons: no physical exertion from the crew required, the noise would be minimal and, most importantly, there would be zero fumes to upset my stomach or head whilst swimming.
Moments later we left Bowness and motored (at 4mph!) to Fell Foot, the official start point of the swim. This was ample time for me to brief Sarah regarding the finer points of my feeding plan and Pash for the best route to Ambleside.

Conditions looked near perfect: a slight breeze, breaking clouds. I couldn’t have wished for more. With Fell Foot in full view Chris squeezed into his rubber torpedo suit, Pash skilfully moored us at the jetty and it was time to strip, grease up and commence my attempt to swim England’s longest lake.
Pash started the clock at 11:14am as I lowered myself into the water and began stroking in as relaxed a manner as possible. Initially we had to manoeuvre around several moored yachts before having clear open water ahead. The boat was positioned to my right hand side, so all I had to do was breath. I was completely confident of being piloted the shortest possible route. I didn’t want to have to sight ahead which strains my neck. It was great having the boat for company, knowing all my needs were taken care of by a very upbeat, enthusiastic crew.
The arrangement was to feed every 30 minutes on Maxim and possibly some solids in the shape of jelly babies, chocolate rolls, Jaffa cakes or similar. I had pre-mixed the Maxim just before we left home. All Sarah needed to do was pour 200mls into the feed bottle, add 200mls of hot water, attach to the ‘Cliff Golding reel and line’ and dispatch it to me in the water.
The first feed arrived in what seemed like no time at all. I drank the maxim as quick as possible, ate two jellies, and swam on. At this point my stroke rate was 64spm. I felt great. The next couple of feeds were fairly uneventful, Sarah was keeping notes on what I consumed and Pash logged the. It was going like clock work.

So, two hours passed. Pash recorded that I was in good spirits, was joking about the water temperature and splashing the crew mid stroke. I was happy enough, but was developing a bit of a headache which I put down to the Cressi goggles I’d opted for at the start (they have yellow lenses and make any day look bright and cheerful). As a result I flipped over mid stroke and requested some clear Aquasphere Goggles at the next feed.
Shortly after 14:30 we passed the half way point and crossed over the west side of the lake where we would remain until the last couple of kilometres. This lifted my spirits and I remember upping the pace somewhat as we travelled through the shallows.
By 15:15 I was starting to feel a little full on Maxim and felt the need to flush out my system before I over loaded so I asked for plain water. Pash asked if I was all right. I said “I’m having a bit of a blip but I’m OK.”
I swam on once more knowing the next hurdle was the cross over back to the east side. Somewhere around this stretch the water became a little more difficult to the extent I had to adjust my recovery to combat the waves. It soon became apparent this was due to speed boats and water skiers, which surprised me as the lake has a 10mph speed limit! At least it gave me something else to think about and broke up the boredom of the ideal conditions with which I had been blessed for most of the swim.
We passed Wray Castle at around 16:15 and I spent some time on my back resting my shoulders. By this stage the days Maxim felt like it no longer wanted to stay in my stomach. I was becoming increasing agitated by nausea, which was forcing me to stop, face away from the boat and let out almighty belches. I was not actually vomiting though it was on its way for certain.
At the next feed I declined everything due to the stomach issues and decided to continue without eating or drinking hoping it would settle down. A Rennie tablet had no effect so I plodded on recognising Low Wood Hotel and knowing full well I was inside the final mile.
Throughout the next half an hour or so the sickly feeling continued. I stopped several times to address this, taking a breather before swimming on. Sarah entered the water for the final leg through the small boats moored near the Ambleside Youth Hostel and the end was literally in sight: the Ambleside Waterhead Pier.

After 5 hours 58 minutes and 58 seconds Chris, Sarah and I all swam across the finish line! Job Done!
I struggled to dry land, and proceeded to be violently sick, my hips were very sore and my stomach felt like it had been turned inside out. Still, I was delighted to have finished, to have completed the swim and hit the target I set some time ago at the start of the season.
The sickness preventing me from enjoying a post swim meal but that wasn’t important. The day was a complete success. My crew, whom I cannot thank enough, were absolutely awesome. Everything went exactly according to plan and I learnt a lot. Not least of which is the strength at which I can handle Maxim.

What might newly proposed trespass laws mean for wild swimming?