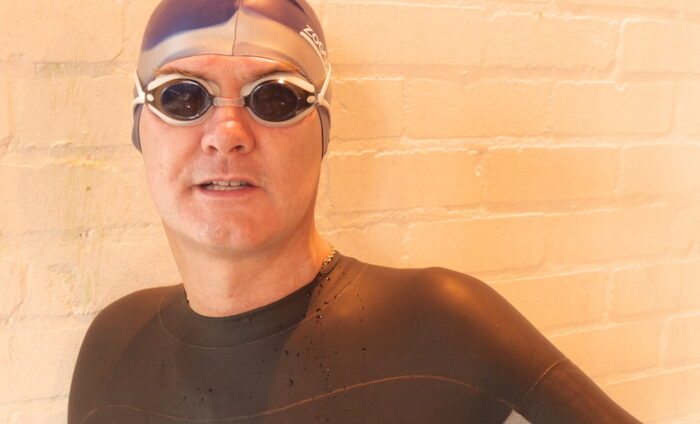 Ten years ago Christopher Smith couldn’t swim. He is now a qualified sports therapist and plans to swim the Solent butterfly

I couldn’t swim as either a child or an adult. My father took me to the pool when I was three years old, and the next time I went into the water was 45 years later. I’d had a fear of water for most of my life, and avoided swimming lessons as school, because I was told that the teachers threw you in at the deep end. I don’t know how true that was because miraculously whenever we had swimming lessons I’d suddenly not feel very well, or my ankle would hurt, or I’d have forgotten my swimming trunks! After a few months the teachers gave up and I’d sit in the changing rooms reading.

By 2008 I was overweight and had also developed a spinal injury. My physio was constantly nagging me to lose weight and eventually I lost over 5 stones, but then she started nagging me to go to the pool and swim, as she felt that swimming would help to strengthen my core and relieve the pressure on my spine. After a couple of months I realised that she wasn’t going to give up and I admitted to her that I couldn’t swim. She found a pool that ran adult lessons a stone’s throw away from my house. Even though I’d lived in the area for more than 30 years and had no idea that the pool even existed!

Six weeks later and I could (very badly) swim a width, and six weeks after that I swam a mile!

I took to open water almost immediately and lost the fear that I’d had for my whole life, and soon I was swimming in the River Mersey, the River Thames, the Pacific Ocean in California as well as the Adriatic, the Ionian and the Mediterranean. Every chance or every opportunity and I’d be in the water. I did a few triathlons and my favourite part was always the swim leg. Less than a year later I went to San Francisco and swam from Alcatraz to the bay area, and wrote a blog post entitled Eat, Sleep, Swim which had more than 1 million views online.

By 2008 I was overweight and had developed a spinal injury

Two years after learning to swim I left my job as a regional HR manager in an organisation that had employed me for more than 30 years and went to college and retrained as a sports therapist. I truly believe that learning to swim gave me the confidence in so many different areas of my life and helped me to overcome fears and anxieties, especially going to university as a 50-year-old mature student, and leaving a secure, well paid job.

During my time as a student I worked part time in the pool where I learnt to swim and still do a few hours there every week. After so much enjoyment from the sport I was keen to give something back and run a free sports injury clinic, based at the pool. I was honoured to recently win the Warrington Sports Personality Award and the Warrington Inspiration Award.

Swimming is a way of life now and I swim four times a week, both indoor and outdoor all year round. My favourite open water swimming spots are Manley Mere, near Chester, in the summer as well as Hatchmere Lake throughout the year. I’m happy to swim either with or without a wetsuit and my favourite swimming spot overseas is in the sea in Cote d’Azur, at Villefranche or Antibes. I don’t swim with a club but I do enjoy the camaraderie of swimming at a regular venue throughout the spring and summer. The numbers tend to slow down a bit in the winter, but there are always a few hardy souls around!

I plan to swim across the Solent from IOW to Portsmouth but my intention is to do it swimming butterfly, and I also plan to swim from Finland to Sweden, especially after reading the write-up in Outdoor Swimmer magazine.
I may have missed out on lots of swimming fun and adventures when I was younger but I like to think that I am making up for it now.

If not now, then when?