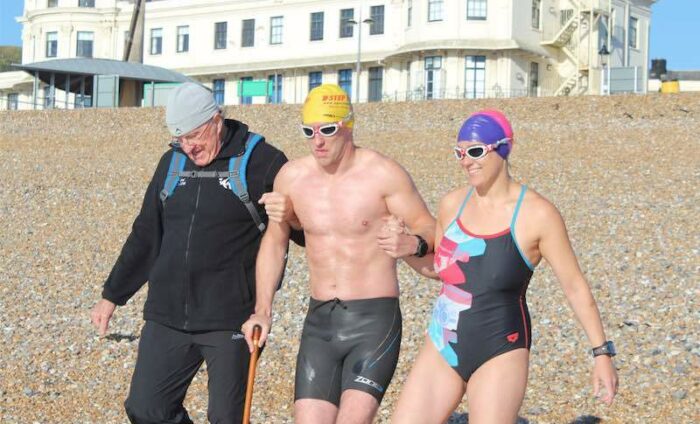 Swimming for me, like many others, started while at primary school at the local swimming pool. I took to it easily and loved being in the water. A couple of years later I completed my ‘Bronze Survival Badge’ and swam for the school on the odd occasion with all the gusto that a youngster gives to sport. This was spurred on by my dad, who turned heads when in the pool as he had a lower leg amputation, which was an injury from his service in WWII. While seeing a disabled swimmer is commonplace in 2016, in the 70s less so.

But fast forward 30 years and I’d fallen out of love with swimming after losing much of the use of my legs due to suffering from MS, and hadn’t been to a pool for ages.

Then along came the amazing summer of 2012. The Paralympic Games were a real eye-opener for me, but not for swimming. It was the handcycling that blew me away. In particular, it was the story of Alex Zanardi, the ex-F1 driver who had lost both his legs in a racing accident but went on to win two golds in the H5 handcycle, that inspired me.

After that, I found out everything I could about handcycling, where to source a bike and how to get going. Eighteen months later I had a fabulous racing bike and entered the Prudential Ride London Handcycle Classic, where the world’s top 30 handcycle racers take on London. It was quite an incredible weekend in the capital.

Looking for a wider challenge, triathlon (and more specifically the longer distance Ironman) was calling me. Before I know it, I’m trying to figure out a way to swim without the need for legs. It turned out to be easier than I thought it would be and quite quickly I was comfortable in the water and able to comfortably keep up with the average triathlete. Indeed, lining up alongside a thousand or so athletes on the coast of the Adriatic in Croatia, it was apparent that the swim was the part that held no fear and I really enjoyed it.

By spring 2016 I was looking for yet another new challenge, my own Everest to climb. Clearly an Everest assault isn’t going to happen. Yet, maybe, just maybe, a solo Channel swim is possible? I booked a slot with pilot Stuart Gleeson for September 2017 and set myself a fundraising target of £2000.

I signed up to the Varne Ridge English Channel Swim Training Camp, organised by Tracy Clark and Roger Finch, both Channel swimmers and also veterans of many crossings as support crew. Varne Ridge is famous in the Channel swimming community as it’s the place where so many swimmers stay before their swims. Owners Evelyn and David Frantzeskou go out of their way to make swimmers welcome.

However, despite making the booking, it dawned on me that in the great scheme of things I’ve actually done very little swimming. The apprehension started to build: am I really planning on swimming across the English Channel?

The camp took place in October, which was ideal for me as my swim is booked for the end of September 2017. This meant the sea, light and weather would be as comparable as can be expected. Also my pilot Stuart and his boat, Sea Leopard, were an integral part of the camp, so it was too good an opportunity to miss.

As the camp went on we all achieved some great personal goals, from being able to be in the progressively colder water or just gaining personal experience into what the effects of different foods or nutrition does for you.

On the final evening, we shared our evening meal at the White Horse Inn, the Channel swimmers’ pub. Where else could we have gone? This was an opportunity to reflect on our own goals and chat about the past week with a bunch of new-found friends, whose progress I can’t wait to follow as they follow their own Channel dreams. We could also look back on some very special moments that will certainly help me across the Channel in 2017.

Help Mike beat his fundraising target by donating at justgiving.com/fundraising/MikeDawsonSwim

Coronavirus: which lidos and outdoor pools are open?