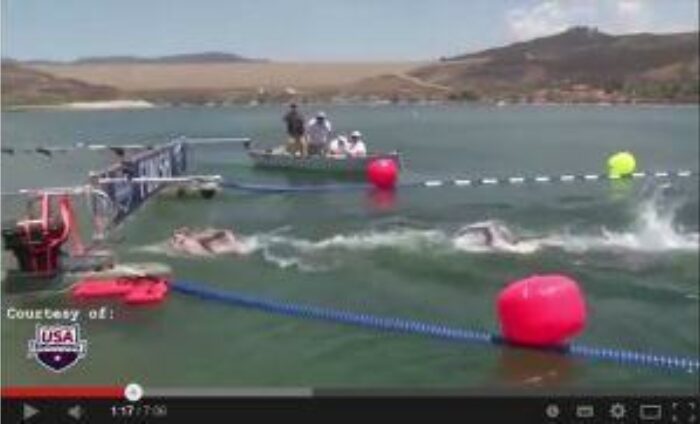 US swimmer Alex Meyer is a former 25km open water swimming world champion (2010) and represented his country in the 2012 Olympics in the 10km marathon swim where he finished tenth. He recently spoke to VASA, a maker of swim training benches, about his transition from college athlete to full-time swimmer, and about his training.

Listening to Meyer you quickly appreciate that being a full-time swimmer is seriously hard work – not just in terms of the early morning starts and long hours of training but also in the constant effort to make ends meet.
At first, he says, switching from being a college athlete to full-time swimmer didn’t feel too different.
“I pretty much just substituted naps in place of class time,” he says, which sounds ideal. But as time moved on he’s taken on more responsibilities for coaching and mentoring within the team, increased his land training and had to devote more time to keeping up swimming-related business.
Most of Meyer’s income is derived from the Athlete Partnership Agreement, for which he is grateful, but living in Boston is expensive. He says, “there isn’t a lot of discretionary spending in my budget.” Additional income is generated through some sponsorship and prize money, and he even teaches a few private lessons here and there for some extra cash.
“I guess I thought being a professional athlete was just going to be eat-sleep-swim,” he says, “so I was surprised by how many little things I need to constantly keep up with on the business end. I think I became more aware of these once I realized how much I had neglected them in the first year or two after graduation. As in swimming, I’m constantly learning from my mistakes!”
Despite the hard work he’s very happy with his career choice to date.
“Swimming has enriched my life tremendously in many ways, and given great meaning and purpose to it. I’ve learned universal and translatable life skills through the process of pursuing my goals in swimming. And most importantly, I’ve met many amazing lifelong friends through this sport.”
Meyer admits he struggles with the early mornings and that he is definitely not a morning person. He describes those as “the grind” – something he just has to do to achieve his goals.
On training and performance he says there is no substitute for swimming and racing experience but land training is also important and if he can’t get in the water he likes to use a Vasa Swim Ergometer.
“Keep it on a low resistance (1 or 2) so you can spend a good 30-45 minutes on it before you’re totally wiped out. Practise everything that you would in a pool – good straight body-line (don’t let your legs sway from one side to the other), high elbow catch and hold it through the pull. Vary the tempo and intensity, mix in some sprints with active or passive rest between.”
When it comes to racing in open water he coyly says he’ll be keeping his best secrets secret but he does say that a key part is making the smartest decisions and spending your energy wisely.
“You want to make sure that if it’s going to come down to a sprint, you have something left in the tank,” he says.
Meyer’s goals for 2014 include the US open water nationals and the Pan Pacific Games in August. Longer term, like many elite open water swimmers, he’s dreaming of racing and winning in Rio in 2016. Meanwhile, he’s mostly simply enjoying what he does for a living.
“It’s pretty apparent to me how special and rare this opportunity is. I’ll be sitting on a beach in Australia or Spain or Mexico and be thinking ‘this is my office, this is work’, and that’s pretty cool. I’m living my dream. But that makes it sound too easy, so I’ll say I work the dream, which has become the motto for the Fran Crippen Elevation Foundation.”

Alex Meyer’s performance tips
Clear your mind: Swim for yourself and be in the moment. Pressure to perform is never something that is put on you, it is something that you yourself create in your mind. So, stop it – let the world outside the race cease to exist, and swim passionately and intelligently. Pressure can absolutely motivate people, including myself, but I put a lot of pressure on myself in a negative, scary way in London, and I let it affect my swim.
Be prepared: Preparation really involves not just the body, but also mind and spirit. I think in part my training was not where I wanted it to be because of my injury earlier that year, but I also couldn’t eat that morning because I was so nervous, and I didn’t decide what suit I was going to wear until 10 minutes before the start of the race, which caused incredible stress. Injury aside, I could have avoided these things. Mind, body and spirit must all be healthy and prepared.
Love is the most important thing: My mentor, coach, and friend Paul Asmuth mentioned this to me right before the race in London and I will never forget it. It’s important to remember – and may help with clearing your mind and being prepared – that at the end of the day, or a career, medals and accolades come to mean less and less over time, and that the most enduring rewards from swimming are the relationships we forge that last a lifetime. 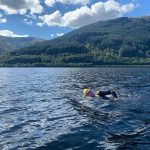