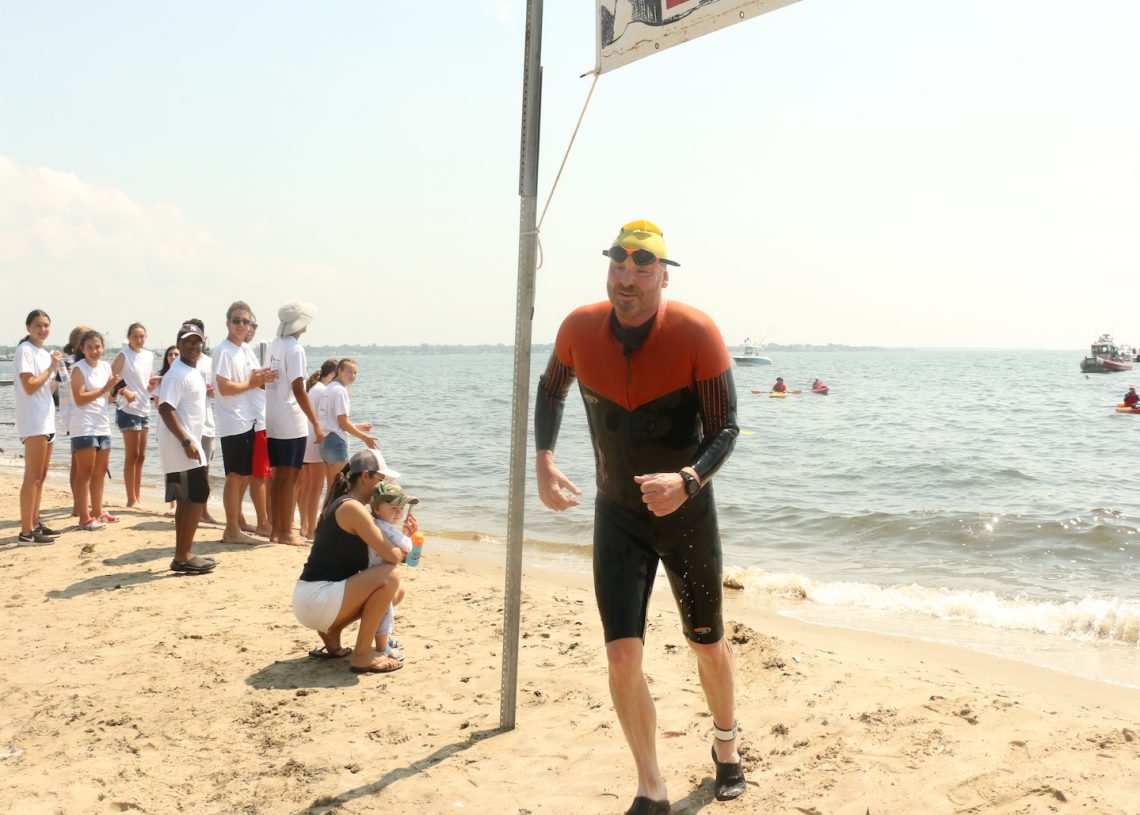 Edward Chessman contemplated doing the Cross Bay Swim for years. Buoyed by a new sense of freedom after the pandemic, the support of his friends and his love of classic American literature, he decided to give this “legendary” New York event a go. Edward shares his experience with us…

“Call me Ishmael,” began Moby Dick, the classic American odyssey. Herman Melville had keen insight of the human condition and the role of fate. To what end does one sacrifice to reach a goal? All of us ponder a great challenge in our lives at some point, but are we up to it? Too overwhelming or unattainable? The relentless obsession of Captain Ahab to subdue his nemesis led to his demise. Recognition of our strengths and weaknesses will help us better understand the consequences of personal sacrifice or obsession.

What drives people to participate in adventure? For me, the Cross Bay Swim was at the top of the list. A grueling 5.5 mile swim from Kismet, Fire Island to Brightwaters, Long Island. I’d contemplated it for years but realised time was running out. Recently divorced and in my late 50s, I decided to pursue this dream and go for the gold.

In memory of Maggie

The cause was a worthy one – the Maggie Fischer Scholarship at St Anthony’s High School and the rest to our local hospice. Maggie Fischer was an energetic, 17 year-old student and lifeguard whose life was tragically cut short by a car accident three days before participation in this race two decades ago.

I reflected on the unfairness of life and how the hand of fate moves coldly for some. As President Lincoln said at Gettysburg, “It is for us the living, to be dedicated here to the unfinished work which they have, thus far, so nobly carried on.” The tradition of this majestic swim started in the late 1920s, the Jazz age, era of Babe Ruth and Jack Dempsey as well at Gertrude Ederle, the first woman to swim the English Channel. It was an honour to participate in such an event.

My training for the Cross Bay Swim began a year before, during the summer of 2021. I’d just attended a high school reunion, and seeing the wonderful people I grew up with lifted my spirits immensely. It brought back fond memories of reckless youth on the Great South Bay, sailing, fishing and clamming along its banks. I started conditioning and completed the Rock Roll triathlon in Cleveland, where I now reside. Keeping the momentum going, I took up yoga, swam regularly and focused on breathing exercises by Wim Hof.

Also, I recalled the stories of a great uncle who sparred with Gene Tunney, perhaps the greatest technical boxer of his time. When faced with the daunting task of fighting Dempsey for the heavyweight championship, he employed discipline, logic and strategy to overcome fears. “The Fighting Marine” was ahead of his time using low hands, quick feet and defensive tactics. Similarly, I thought I could master some of these open water swimming skills and sought the advice of Gerry Rodrigues in his book Triathlon Swimming: Master Open-Water Swimming with the Tower 26 Method. Yet perhaps the greatest advice was from my friends Dave (a lifeguard) and Steve who supported my efforts.

Finally, the day arrived – July 14  2022. I’d arranged the day of work and traveled east to Long Island. Stress was high due to the training, managing donations and anticipation of the race. Fortunately, the sea gods were smiling upon us as the weather conditions were ideal.

Bob Fischer – father of Maggie – who works tirelessly to promote the event, hosted an instructional Zoom meeting the night before.

I rose at 5am without sleeping a wink and travelled to Dave’s house for a lift to Kismet on a friend’s boat. Everyone was registering and preparing for the swim with wetsuits and gear. Each participant was assigned a kayaker, as well as race marshals and the US Coast Guard patrolling the waters. A safe, organised event.

The water was not particularly warm at 7am when the starter’s whistle went off. I was somewhat warmed up with a 15 minute pre-swim and began my quest across the bay, with its green murky water and seaweed. I’d never seen more green slime in my life.

About half a mile into the swim, we reached a shoal that I was able to walk across for 30 yards. Then I was back to finding my stroke, wave after wave through the great morass of salt water, listening to the commands of my friend guiding me across the waters. It was as if I was following Pequod itself with a stern and relentless Ahab at the helm. As Ishmael pressed on in his pursuit, so did I.

I knew my personal reputation was at stake considering the promises made. I could not fail. How many strokes did it take? I estimated 8-9,000 strokes, as I was at the back of the pack and moving slowly. Nevertheless, I persevered and recalled the sacrifices made by those before me. This was something I could do. Strangely, I began to enjoy the swim and the unusual view of the lighthouse, causeway bridge and shoreline. It was not a struggle or a chore.

After four miles, fatigue was setting in and progress delayed as the tide rose and the current grew stronger towards the shore. I kept asking Dave, “How far out?” His reply: “Just a little further, not much more,” so as not to discourage me. His leadership and support during the swim is something I’ll never forget.

In sight of the finish line

As I drew closer, I saw the boats and heard crowd onshore that became louder, whistling and cheering. It was a special moment when I swam in and stood up racing to the finish line. In my enthusiasm, I slipped and fell but quickly got up again. I looked over and saw all the spectators waving and cheering , so I ran over to give them grateful high-fives. Then I quickly jogged to the finish line and gave the old thumbs up.

There to greet and hug me were my two sisters Carol and Patty. Then I saw Steve and his brother – lifelong friends who came to cheer me on. He later gave me a laudable and generous writeup on Facebook that I didn’t deserve but gladly accepted. I emailed my results and photos to my anxious co-workers who’d supported me throughout this project. The Cross Bay Swim was my very own Apollo mission and I had a great crew with me.

The after-party was thrilling – I met so many great people and felt a sense of community with my fellow participants. Bob Fischer was especially engaging and grateful, and encouraged me to return again. He emphasised coaching, training and dedication – all the things instilled in me by my parents, teachers and coaches growing up in Bay Shore, LI.

A time for reflection

As I contemplated the day, I considered my own mortality and the trauma we suffered during the pandemic. This was a way to overcome the restrictions of Covid and celebrate our freedom. In Edgar Allan Poe’s Masque of the Red Death, Prince Prospero sought to elude death with a Masquerade Ball, mocking death itself under a false premise. Death is not mocked, as confirmed in the Latin phrase Momento mori (remember that you must die). We should make no illusions, and celebrate life with goals and achievement. My reasons to continue physical fitness and meet challenges when they arise are many, but they cannot be accomplished without teamwork.

Although I was the final competitor to cross the finish line at the Cross Bay swim, I’ve never felt prouder at coming last. I was even awarded the Best Endurance Award for my efforts. It was both an honour and a humbling experience to receive it. As such, my motto is “Perstare!”

To find more about the Cross Bay Swim, visit greatsouthbayswim.com

Swimming with the Sharks