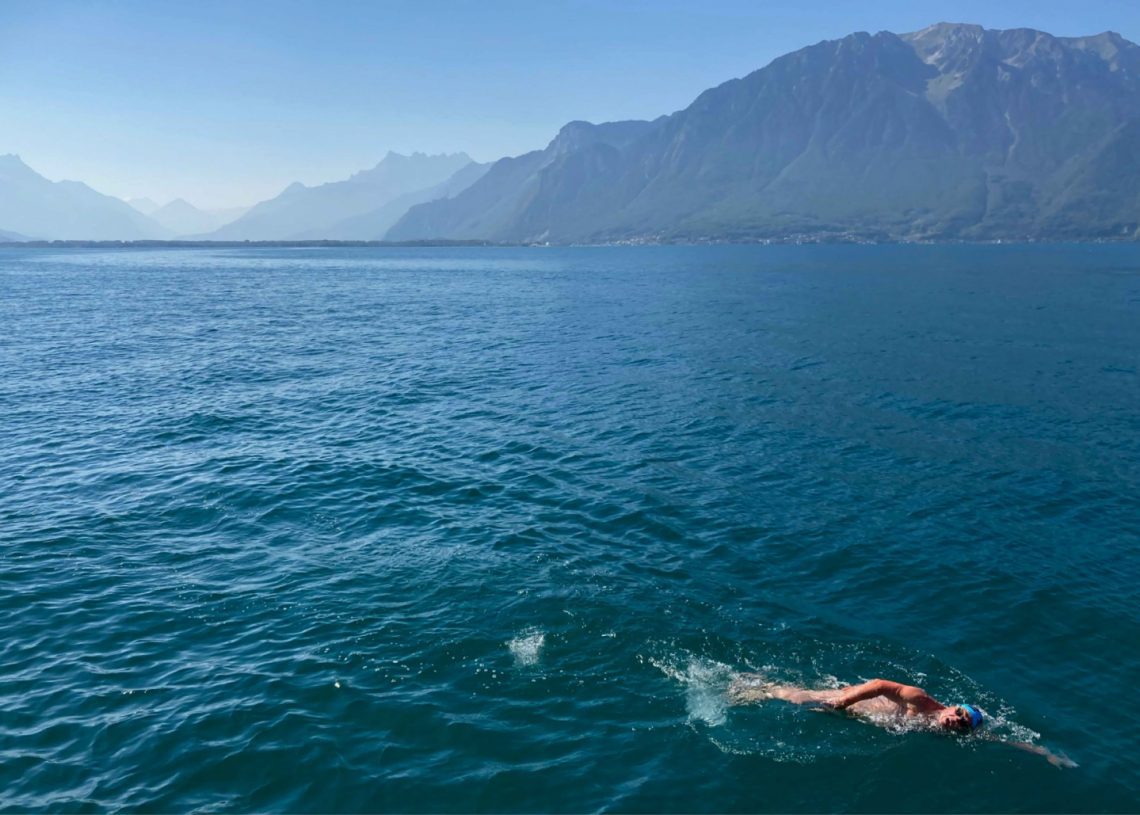 The Kingsdown Crawlers take on a five-person relay swim in Lake Geneva, completing the 78km length in 26 hours and 40 minutes.

The Kingsdown Crawlers are used to ‘home game’ comforts. We train at our shingle ‘Base Camp’ in White Cliffs Country and wait for English Channel swims in familiar beds with home cooking.

August 2022’s ‘away game’, the daunting 78km length of Lake Geneva, starting at Chateau du Chillon and finishing at Bains des Paquis in Geneva, was not so cosy.

Kit lists, logistics and costings rumbled on through lockdown. The five-person team finally deployed by road and sky to idyllic Lake Neuchâtel ‘Acclimatisation Camp’. A family lakeside chalet loan was a luxury and meant some home comforts after all. The countdown was on.

The vast expanse of Lake Geneva revealed itself at sunrise as we snaked down to the Villeneuve jetty meeting point. Shimmering waters reached to a far horizon, more like a sea than a lake. Expert skippers and observers Caroline, Jean, Cindy and Thomas from the Lake Geneva Swimming Association appeared on slick 34-foot pilot yacht Bruscolo 5. Soon all ten were aboard with kit bags, supplies and an Alp-sized mountain of ham and cheese sandwiches stowed. Intimate.

A short hop to the start and Swim Captain Kris, dwarfed by the majestic medieval chateau, was suddenly crawling powerfully through thin morning mist. At last we were off. Speed merchant Vicky, who bashed out a 12-hour English Channel solo last year, was next, prompting the Skipper’s hand on the throttle.

Watching Lee, breathing to his right, gave us stunning views. High Alps rose dizzyingly from the far side of the lake. The Dents Du Midi and other ranges faded in chiaroscuro worthy of any Renaissance master. But after Dave’s first dip, we were still level with the money drenched suburbs of Montreux, making only a tiny dent in the giant task. Number five swimmer Bryn glided through calm waters under searingly hot midday sun.

Changeovers were smooth, a legacy of Channel relay days, and slowly the lake began to unfold. Lisa settled into her invaluable Swim Crew role: smearing, feeding, drying, wiping and cheering with tireless enthusiasm.

Progress: the urban density of Lausanne clung to the south facing Swiss hillside, and thrashing water wheels of ferries plodded about their romantic work.

It became ‘a game of two halves’, day and night, as gathering storms rumbled over the Jura and dusk set in. The team had trained well. When the chips were down everybody performed well too, with massive support for each other and hilarious banter on board. Despite heavy downpours and crashes of thunder and lightning, Lee, Dave and Bryn got the best of the night conditions. “BOOM!”. “How close was that one?!”. A firework display on the French lakeside added to surreal and disorientating blasts of sound and light.

The swim would have been ‘pulled’ had Kris and Vicky not coped with heavy chop and driving rain. Wind began to make the yacht and its parachute-like drogue uncontrollable. We are used to cold salt water and it’s buoyancy. The 23ºC lake temperature was sapping and, being low in the water, we had to work hard against the increased resistance. Coach Charlie’s words rang in our ears: “You have a job to do, go out and do it”.

We slept a bit and a new dawn eventually broke, restoring calm. Lee and Dave’s fifth and final stints took us around the last big headland. Geneva came into clear view, sparkling in morning sunshine as Bryn ploughed on, followed by Kris on his sixth one hour shift.

The iconic Jet d’Eau fountain awoke and reached for the sky: a better welcome than any fanfare. Vicky, determined to ‘land’ the swim, leapt in for a lung bursting lunge for the finish. Last drops of energy propelled the triumphant team, trailing in her wake, up Bains des Paquis beach twenty six hours and forty minutes after ‘kick off’!

The swim made us only the 15th successful Lake Geneva relay. There have been nine solos. We think that counts as an ‘away win’.

Dive into more readers’ swims on our ‘features’ page. Kit up for your next swim at the Outdoor Swimmer Shop.

Words by Dave Chisholm. Lead image: Lee Wakeham swimming, with the eastern end of Lake Geneva and the Alps in the background. Photo: Dave Chisholm