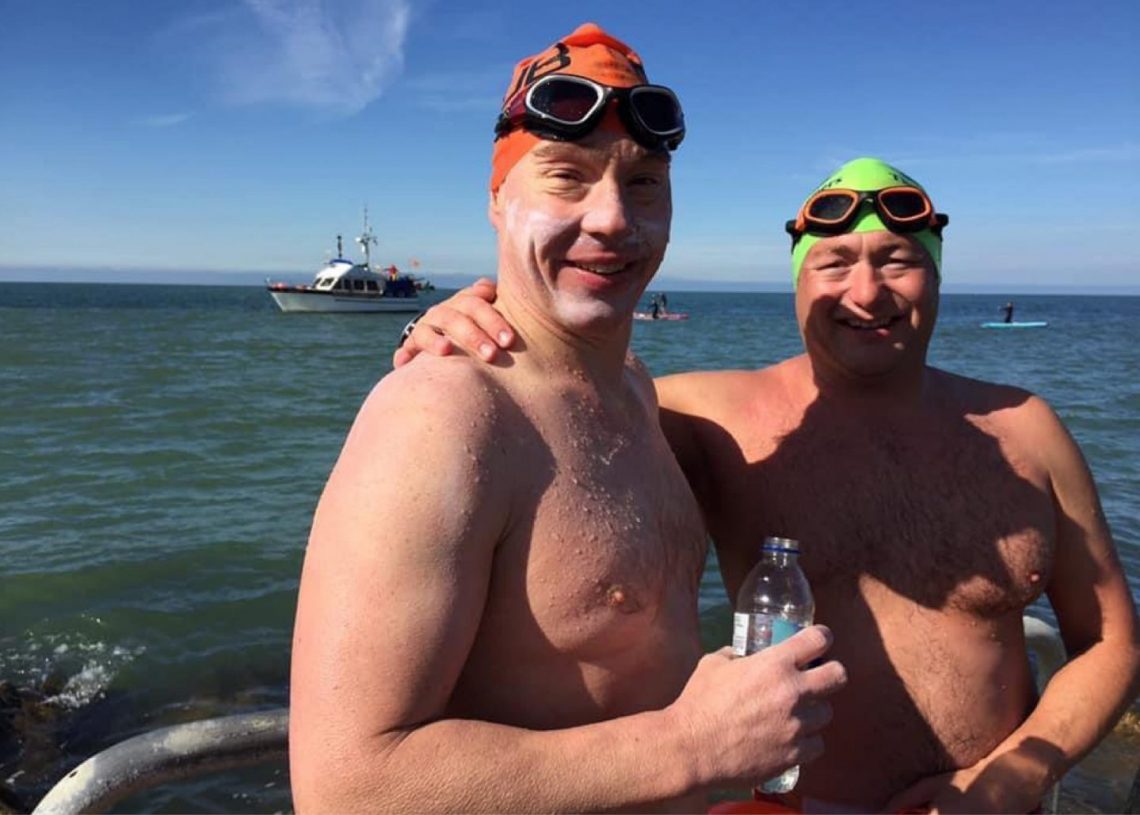 Channel swimmer and melanoma survivor, Dan Whitaker explains why sun protection for swimmers is vital in winter as well as during a heatwave.

Dan Whitaker, English Channel swimmer and melanoma survivor, has recently become a Sunguarding Sport ambassador for the Melanoma Fund to share his story and help raise awareness about the dangers of sun damage when exercising outdoors. In the midst of a heatwave, we spoke to Dan about some of the challenges facing long distance swimmers, why sun protection for swimmers is vital in all weathers and how to protect your skin even after your swim.

A vital message for swimmers

The Melanoma Fund launched their Sunguarding Sport campaign this May, generating support from over 60 national governing bodies. The campaign targets sportspeople in particular as they routinely exceed the recommended sun exposure limits, increasing their risk of skin cancer. Factors such as sweating, water contact, minimal clothing and lack of shade make it all the more important.

The campaign is all about prevention. “When you’re swimming, you get hit by the sun’s rays twice – from the sky but also when the rays bounce off the surface of the water,” says Dan. “That’s why it’s vital to use sunscreen that’s appropriate for the duration of your swim, and to always protect your face, neck, shoulders and hands, at a minimum.”

Dan recently worked with Prof. Brian Diffey, a professor of dermatology, to deepen his knowledge on the subject. “As a skin cancer survivor, I know the importance of prevention and applying sunscreen on when you do sport. But I’ve also learnt so much about what is needed when you’re spending up to 16 hours in the water. For instance, I recently discovered that the sun can even penetrate the surface of the sea. So even if you’re underneath the water, you can still get burnt.”

Make sun protection a part of your routine

Dan has a host of swim specific tips to share, based on his own experience but also his work with the experts at the Melanoma Fund. “There are two types of sunscreen: chemical based products, which don’t allow the rays to absorb into your body,” he says. “Then you’ve got mineral based products such as zinc, which has recently become popular as it’s now transparent so you don’t get white stripes on your face like a cricket player. Personally, I don’t mind the white stripe, because you can see where you’ve put the cream on.”

He now has his pre-swim routine down to a fine art. “Firstly, I cover myself in sunscreen at least an hour before a swim,” says Dan. “What I tend to do is to put a layer of chemical sunscreen on first, and let that absorb for a good hour before I go into the water. Then half an hour before I swim, I put a thicker mineral-based cream on. It’s a belt and braces approach.”

He has also learnt that there’s a certain way to put on suncream. “You shouldn’t excessively rub it in, you should literally put it on, wipe it once, then let it soak in,” he says. “I would say, get yourself an old t-shirt and tracksuit bottoms. Apply your sunscreen at home, then put these old clothes on and drive or walk to your swim. Just build this preparation in your routine. Maybe put some moisturiser at the top of your bag, to apply to your face afterwards, too.”

Skin recovery after your swim

Skin recovery is equally important. “Being in the water, believe it or not, takes the nutrients out of your body through the process of osmosis,” says Dan, whose post-swim routine involves pouring a bottle of fresh water over his face and upper body.

“Whether it’s saltwater or lake water, you need to clean your face in a sense,” he says. Then he applies moisturiser or aloe vera straight away, then another layer of sunscreen, before covering up with long sleeves and a hat that covers his neck.

“Your skin is actually quite fragile. It’s like a shield around us that protects us from the external environment,” says Dan. “If you think about how your skin is your body’s largest organ, why wouldn’t you want to protect it?”

Sun protection is important in winter, too

Another key message that Dan is keen to share is that it doesn’t have to be warm for you to get sunburnt. “You can now get apps that tell you the UV levels for the day, which is actually more important than temperature,” he says. “Even on a winter’s day – you know those frosty mornings when you have clear blue skies but there’s still frost on the ground – you can still feel the sun on your face, right? There doesn’t have to be heat in the sun, for it to burn you.”

Swimming in winter sun, coupled with the way the sun’s rays bounce off the surface of the water, means you still have a chance to get burnt whatever the season. You might also start your swim in cloudy conditions, only for the sun to come out and shine in your face the entire way back. “So every time I go swimming, I put on sunscreen,” says Dan, “certainly on my face, but also on my body depending on the conditions.”

The facts about melanoma are startling. Melanoma is not only the most deadly type of cancer of the skin but also the hardest to detect. However, if it is recognised and treated early, it is nearly 100% curable. If not, the cancer can advance and spread to other parts of the body where it becomes hard to treat and can be fatal.

As you can imagine, Dan was devastated when he received his diagnosis. “We’re 10 years down the line now, so I’ve got used to it to some extent. But the thing is, it all happened so quickly; it was scary. I basically had a mole on the top of my foot, which began to grow.”

At first Dan thought a new pair of running shoes were to blame, but then the mole began to itch and bleed. “After doctors investigated, it turned out to be a Grade B malignant melanoma,” he says. “So they cut it off, then went back again to take wider margins. It was sent off to the lab to be biopsied and it came back as the worst type of skin cancer – an aggressive or malignant melanoma. So then they did a lymph node biopsy, removing the lymph nodes in my groin on one side.”

A change of direction

Luckily, for Dan and his family, the cancer hadn’t spread and he recovered slowly over six months. For the first three months he couldn’t bear weight on his foot. “For somebody who had been used to doing triathlons to just suddenly stop – that was really hard,” he says. Then came the changes to his running and walking gait, due to the tightness of skin on his foot, and the fact that he no longer has a lymphatic system on his right right leg. His muscles contracted and he suffered from sciatica and swollen ankles. He had to come to terms with the fact that running was now off the cards.

“What I’ve discovered is that prevention is better than any form of intervention or cure,” he says. “You might think: removing a mole, that’s not exactly going to be debilitating? Well, as I’ve found out, it can be.”

“The message I’d like to get across is: put sunscreen on every time you swim, or perform any sporting activity outdoors for over 20 minutes, regardless of the weather. It’s a simple message, but it’s so important and it boils down to habit.”

Sunguarding Sport is backed by over 60 national governing bodies and so sport is taking the message seriously. It provides a downloadable toolkit for sports clubs to help them raise awareness of sun protection in sport and outdoor recreation, and to address the UK’s epidemic rise in skin cancer. Find out more at the Melanoma Fund’s website.

Stepping up to 5k