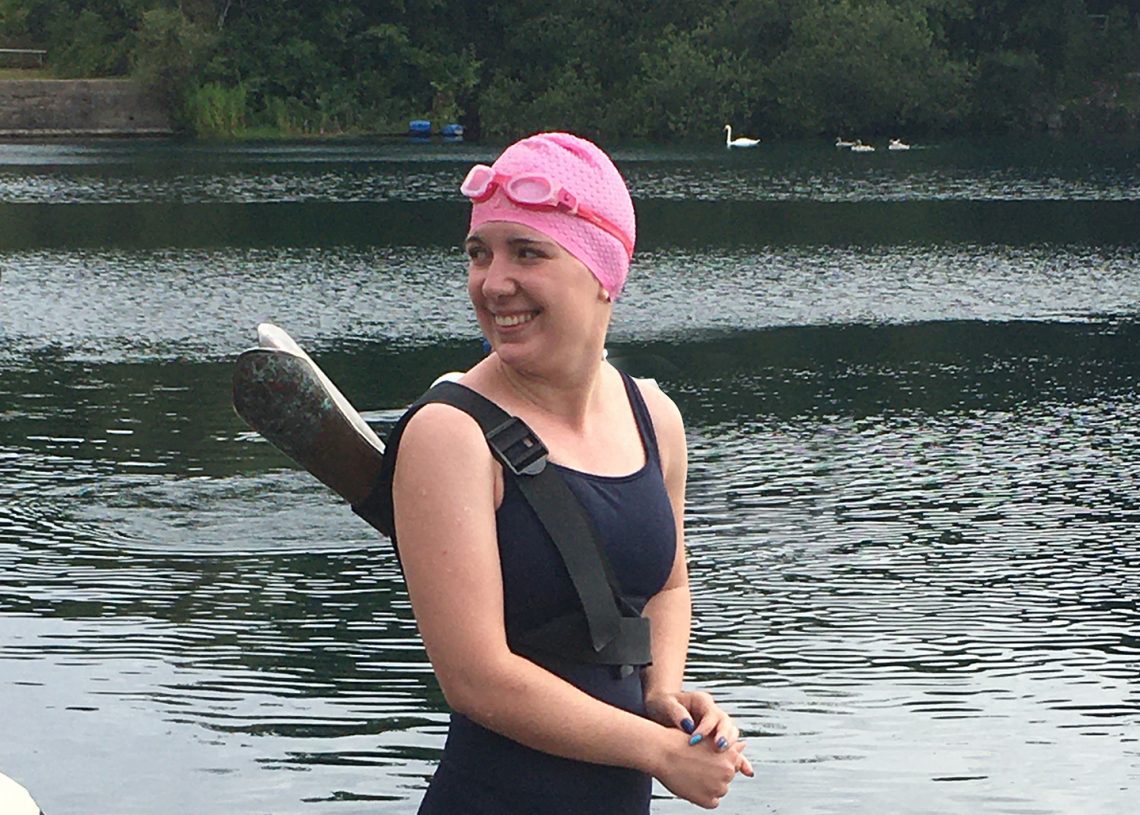 Earlier this month the Queen’s Baton Relay travelled across southern England ahead of the Birmingham Commonwealth Games. After starting its route at the Eden Project in Cornwall it arrived in Maidenhead two days later where Lauren Sharp swam it across Taplow Lake. Lauren shares her story…

On a humid morning in July, I found myself on the decking of Taplow Lake ready to embark on a three-minute swim with precious cargo. I would be carrying a baton as a part of the Queen’s Baton Relay to Birmingham for the 2022 Commonwealth games.

A year before, I wouldn’t have thought for a moment I’d have an opportunity to do something like this: the idea of open water swimming was a tempting possibility, one I had no idea would impact my life and routine in such a fundamental way. Fresh out of university, it felt as though the lockdown experience had passed with little event and spat me out of the other side before I’d noticed what was happening. Swimming gave me a new focus, the feeling of moving forward into the next part of my life. I told myself it would just be for the summer, but I swam at least once a week until early autumn, when, for my birthday, I received a neoprene wetsuit. A gift that challenged me to make it through the winter.

The cold water took me through the January Blues; a morning swim had positive effects on my anxious mind, a remedy few other things have come close to. It became almost an obsession. I read about others’ experience of outdoor swimming; from those who swam with seals in the Orkney islands, to the historic ponds of Hampstead Health. The more I learned about the positive effects of outdoor swimming, it was easier to see patterns in my own life and community at Taplow lake. Even when I got up to swim alone on frosty mornings it was never a solitary sport, there was always a likeminded swimmer in the water with me. The community of swimmers at Taplow Lake is something special, but I don’t doubt that every outdoor swimmer feels that way about their own swimming oasis, their own regular faces, their own hot chocolate on a cold morning.

In June I took on my first swimming event, the Shepperton 24-hour relay swim, to raise funds for Level Water, a charity that provides swimming lessons for disabled children. Our team of seven swimmers, all regulars at Taplow Lake, took it in turns to swim for an hour and in-between we supported each other, laughed and took in the uplifting atmosphere. One of my swims took place at 1am: the lit-up swimmers looked like fireflies on the water, their low chatter bouncing off the inky water.

As swimming has become such a large part of my life and the community is so important to me, it was truly a privilege to be asked to swim as part of the Queen’s Baton Relay. On the day, there was such a sense of excitement in the air, as me and my fellow baton bearers prepared for it to arrive, I felt unusually calm. The baton itself was a wonderful object, deceptively light, with a specialist 360 camera and sensors to record its environment. It sat comfortably in a harness on my back as I swam through the water while the community watched from land. I’m very proud that I was able to represent not only Taplow Lake, but outdoor swimming as a fantastic sport.

The Baton will end its journey at Birmingham Aston Hall on 28 July, the day of the games’ opening ceremony.