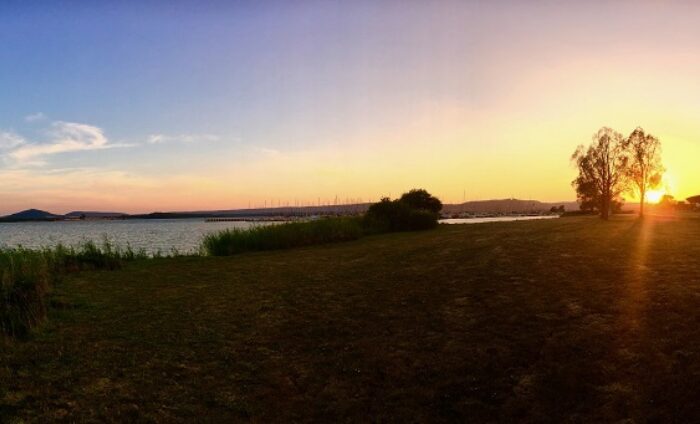 Swim on the Wild Side, to a group of outdoor swimmers on a unique an

interesting challenge that he devised. The aim was to swim 4km in open water,

four times in four different countries in one day. It sounds like the 16km of

swimming was the easy bit…

was a shot dead in Brussels was always going to be logistical headache. We

started in Zeebrugge, picking up three swimmers who’d arrived by ferry and two

more from Brussels airport. To say there was an army of militia surrounding the

airport would be putting it mildly. Every vehicle was stopped and searched

prior to reaching the airport terminal. Luckily, our luggage (which consisted

primarily of wetsuits, swim kit and emergency food and drink supplies) was

we stayed the night.

Actually, we only stayed half the night as we were up at three in the

start time). We then set off for our first 4km swim of the day in the beautiful

Rurtalsperre Schwammenauel and arrived just as the sun broke through the

horizon. It was all going so well, until we discovered that water levels were

much lower than we expected due to a recent spell of dry weather. The two

islands we had planned to swim between had now become one. Never mind. Our

kayak support, guided by a Garmin, quickly plotted us a different route and we

soon had the first 4km completed.

Flushed with our initial success, we changed at our leisure and ate a second

breakfast before returning to Belgium for part two. We lingered perhaps a

It was all going so well, until we discovered that water levels were much lower than we expected

I had previously contacted Beverly Weekend, a resort on Stausee Bütgenbach a

reservoir in Flanders, to see if they could help pin point a safe place to

enter our swimmers for their second 4km swim. Very kindly they offered their

own resort and facilities, despite our planned arrival time of 7:30 in the

morning. However, it was now 9:30 and when we reported to reception they said: “Yes,

we know who you are, but you’re late!”

dozen yachts, a group of kayaking kids and a beginner’s windsurfing class. Fortunately,

other water craft away from us.

lake and we then set off for Luxembourg and a 4km swim in Lac de la Haute-Sûre.

Little did we realise it was a public holiday and where we planned to swim from,

Insenborn Plage, was packed with locals picnicking on the banks. Most swimmers

at this stage had decided to forgo their wetsuits but kept on their costumes,

unlike some of the locals we came across further down the river. It appeared we’d

male sunbather flexing his muscles on a rock high above us.

cake) and hit the road again. At two and a half hours, this was the longest

drive of the trip. We arrived at our final venue, Lac de la Madine in France,

just before sunset. We rushed down to the water’s edge, launched the kayaks and

started the last 4km swim of the day. While the water in the previous three

swims had been crystal clear, this lake was somewhat chalky and very choppy.

While the chop was to the liking of several of our swimmers, to others it was a

nightmare due to fatigue. Still, we got through it, and then tucked into a

Swim on the Wild Side is a

Cumbria-based outdoor swimming business. In addition to tours and trips around

the Lake District, the company runs luxury swimming trips to Europe. Find out

When and how might we get back to outdoor swimming?