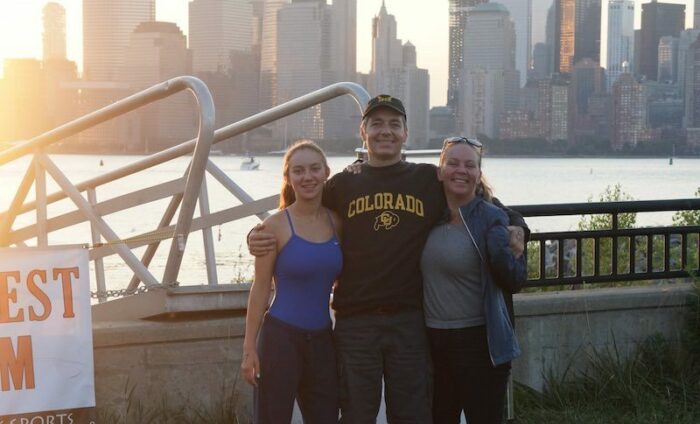 Gavin Maitland underwent a double lung transplant at the age of 41. He now swims to raise awareness of organ donation

“If you come across a dead body in the water, make sure you tell one of the kayakers!” the wetsuited man standing next to us said as he grinned at his friends.

My 15-year-old daughter, Riley, and I looked at each other and laughed. Dark humour indeed.  The man was one of a hundred or so athletes who congregated at 6:30 am on this Saturday morning in July at the marina in Liberty State Park for a memorable open-water swim.
The New York and New Jersey waterways have long been reputed to be so polluted that it was said that fish could not survive. Twenty years ago, swimming in the Hudson River was unimaginable.  Nowadays, the water is so clean that open-water swimming around the island of Manhattan is commonplace. Just don’t swallow too much water.
The event was the 2016 Lady Liberty swim, organized by Enviro-Sport, under the banner of Sharkfest Swims. It was a 1.6 mile swim from the Statue of Liberty to the State Park in New Jersey.
When Riley was only 11 years old, she, her brother, Zander, and I, completed the swim from Alcatraz Island to San Francisco. Riley and I subsequently swam across Boston Harbour the following year. This was the challenge I took on to celebrate reaching the five-year milestone after my operation, which is the average survival time for someone with a double lung transplant. My two children decided that if I was going to do it, they would too.
“We have 110 swimmers this morning,” boomed one of the organizers, a huge man with grey hair and a bright red sweatshirt, once all the athletes were aboard the ferry that would take us out across New York City harbour to the base of the Statue of Liberty.  “On my command, make your way to the back of the ferry. It’s a water start.”
He continued with the pre-swim briefing, no need for a megaphone, as his voice thundered out over the forest of eager yellow swim caps.

Since his double lung transplant, Graham Maitland has ‘escaped’ from Alcatraz, swum across Boston Harbour and completed the six-mile Bridge to Bridge from the Golden Gate Bridge to Oakland Bay Bridge in San Francisco bay.

“When we get to the statue, get ready to jump. Once you’re in the water, swim to the green kayaks for the start, and hang tight. Once everyone is in position, we’ll start the swim at the sound of the horn!”

I estimated that about a quarter of the swimmers were not wearing wetsuits. Apart from keeping cold at bay, a wetsuit provides additional buoyancy and less drag. Among experienced open-water swimmers, there is a certain cachet about swimming without a wetsuit. The water temperature was officially declared at 71°F (21.6°C), so the cold was not prohibitive. Riley was wearing her wetsuit. I was not.
Once in position next to the towering green Statue, we calmly jumped off the ferry’s stern one by one. The water felt wonderfully soft and warm on my bare skin.  Riley and I trod water together as our fellow athletes assembled around us, the air filled with chatter and anticipation. As the horn went off, I wished her luck. We knew we could not keep track of one another during the swim, so would meet at the finish.
I caught my breath as I adjusted my goggles, and eased into freestyle. Ahead, the Manhattan skyline was breathtaking. Aim for the landmark of the Goldman Sachs Tower, they had told us. The giant and unmistakable 44-storey silhouette made an easy sighting in the distance.

Lucky to be here

Swimming literally saved my life. A little-known but fatal lung disease forced me to undergo a life-saving bilateral lung transplant when I was 41 years old. Prior to the transplant, my health was deteriorating and I could only breathe in short, shallow gasps. When I woke from the anaesthetic after the transplant surgery, I remember inhaling the deepest, longest, most beautiful breath that I could ever imagine. Despite the searing pain in my torso, I felt like standing up on my hospital bed and cheering.

I have an unusual appreciation for overcoming adversity and I try to prevent the lung transplant from defining my life. Swimming affords me this luxury, as I can compete in events such as this swim on a level playing field. Swimming has been a constant source of physical and spiritual nourishment during my recovery and ongoing management of this unusual health condition. Admittedly, my wife, Julie, still finds lung-transplant and open water swimming something of a hair-raising combination.
Meanwhile, back in New York, the rising sun  pierced my eyes as I turned my head to the right to breathe. One of the motorized support boats was a little too close for comfort. I could smell the diesel fumes across the water. I switched to my left side to breathe for the next and following inhalations.
Manhattan was much closer now. I had lost Riley long ago amongst the specks of swimmers and support kayaks. The early morning swell of the harbour had subsided and the water was smooth and easy to swim through. I felt pleased that my strokes were strong and consistent, and that my breathing was calm and rhythmic.
Coming from Boulder, Colorado, at an altitude of over one mile above sea-level, I appreciated the additional oxygen in the New York air. Occasionally, I could feel a gentle touch on my outstretched hands, only to discover it was the mild and harmless sting of a passing jellyfish. This swim was going to be over far too quickly.

Admittedly, my wife, Julie, still finds lung-transplant and open water swimming something of a hair-raising combination

Ellis Island, the iconic gateway for more than 12 million immigrants into the United States for over 60 years, was on my left. As I turned my head each stroke to inhale, I could see every detail of the building’s intricate reddish brickwork and its ornate towers. I wanted to freeze the image in my mind’s eye as I swam past the celebrated island that morning.

Before I knew it, the finish was dead ahead, and I was hauling myself out of the water and up the ladder. I felt elated. I had covered the distance of 1.6 miles in just over 58 minutes, yet I was disappointed that it was over so quickly. If someone had told me to turn around and swim all the way back to the start, I would have gladly done so.
Reunited with my daughter, who had unsurprisingly finished the swim well ahead of me, and my wife, Julie, our tireless supporter, I took a deep breath of relief.
For Riley and me, open-water swims are a novel way of raising awareness of organ donation. If people asked, we would say: “Yes, we swam from the Statue of Liberty. Don’t forget to be an organ, eye, and tissue donor!”
Riley placed second in her age-group, 20th overall. I placed fourth in my age-group, 53rd overall, meaning that I finished in the top half – although only just – in the field of 110 swimmers.
“See any dead bodies?” She was deadpan.
“No, you?”
She smiled.
“Dad, you didn’t swim very fast, you know,” she observed as we walked from the finish area towards the awards ceremony. “I’ve been here for ages.”
It was hard to escape Riley’s competitiveness.
“Well, yes.” I reflected for a moment. I could point out that I doubted if many of the other swimmers had undergone a double lung transplant. But I settled with, “I think the others probably do more training than I do. Maybe I should step up the pace. What do you think?”
“Yes,” she replied, nodding pensively. “You probably should.”

Tips for swimming with a health condition

• Check-in regularly with your doctor

• Start gradually. Build up distance in the pool. Aim for a continuous mile
• Consider swimming lessons. A coach can help by eliminating stroke inefficiencies
• Focus on what you can do, not what you cannot do. Say no to excuses
• Set a goal. Choose an open water swim event and register. Tell everyone you know about your upcoming challenge. Commit to raising funds for a favourite charity

As a swimmer, resistance is your adversary. You must displace the same amount of water as your body mass, and water is 800 times denser than air. However – and this is the important part – your apparent enemy, the water, also supports you and propels you forward. Your very enemy becomes your friend. This is analogous to life itself. The problems we often encounter in life also support us and make us stronger. I invariably use the life lessons of swimming to overcome the challenges and complexities of lung transplant.

As humans, we have an undeniable affinity for water. Over 70 percent of the surface of the Earth is blue and our bodies are 70 percent water. But there is more to it than that. There is something awe-inspiring, humbling, and even mystical about open water. Therein lies the attraction.  Space is seemingly limitless on all sides – above, below, all around you. Just as Zen Buddhism emphasizes the use of meditation and intuition, so open water swimming can provide its own source of peace and serenity. Open water swimming fills the mental space normally filled by the problems and distractions of day-to-day life.

Gold for Ruffini and Bruni in Hungary

Jim Doty: A swimmer who made a difference, and a swim in his memory