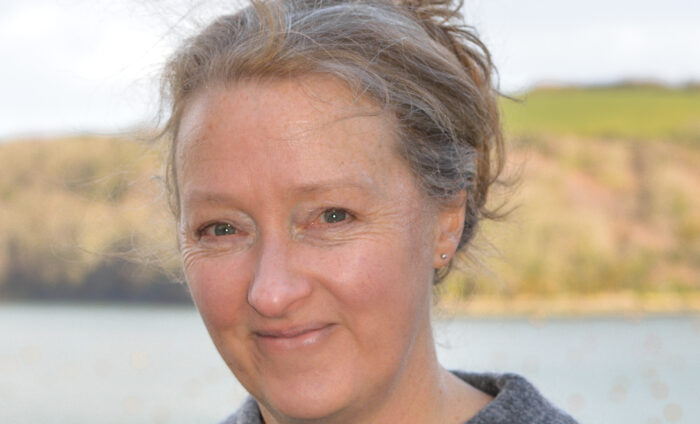 When Raynor and Moth Winn found themselves homeless, they decided to walk the South West Coast Path. Ella Foote meets the writer of The Salt Path

How often in life are we told to just keep going? To just put one foot in front of the other and just take one step at a time. It is common advice and action we often take, because we have no other choice. We can’t change our past, our ideas of the future may never work out, but we can take steps in our present. This is exactly what Raynor Winn and her husband Moth did. They found themselves homeless, with no money and no idea what to do. So they put one foot in front of another and walked the South West coast path, all 630 miles of it.

Raynor Winn’s first book, The Salt Path, came out earlier this year and quickly became a best seller. It is the best and my favourite book I have read so far this year. I am constantly seeking the next book and author I can swimterview. Sometimes I get sent books, sometimes I discover them through social media and sometimes, like this book, they just talk to me from a bookshop window. My eye was immediately drawn to the beautiful cover, the sea and water illustration pulling me in. Any book that is about the coast or water, I am drawn to like men are drawn to a mermaid’s siren.

We had put 20 years of time, effort, money and everything into our home and work

The Salt Path is a true life account of a couple in their 50s walking the entire South West coast path after a bad investment leaves them homeless. Raynor and Moth lose everything, their family home and business. At a complete loss, thinking things couldn’t get any worse, Moth is diagnosed with a rare neurodegenerative disease and told he would die. “They gave him two years,” says Raynor. “And we were told most of this time he would be in decline.” I meet Raynor in Fowey, on the south Cornwall coast. It is one of my favourite spots in Cornwall and it is a joy to meet in such a beautiful place. Raynor has recently had a knee operation and is still recovering, so swimming for her isn’t an option. So the plan is to meet and drink cups of tea, before I swim from one of the stunning locations off the coastal path.

The pain of every step

The book has been a huge success and no one is more surprised than Raynor herself. “I had no idea I was going to write a book,” she says. “I started to write it, just so I could remember it, because it felt like something important to me. But once I got back onto the path in my head, it was like I was walking the path again and couldn’t stop myself. The writing just ran out of me.” The book is a blend of adventure, endurance, human spirit, travel advice and a love story at the heart. Not some romantic nonsense, but true, gritty, raw love for each other and for life itself. “I wanted every word to count and keep you on the path,” says Raynor. “I wanted to immerse you in that walk so it felt like you had walked it with me.” This is what makes the book such a wonderful read, it really is like you are walking the path. Feeling the pain of every step, the pressure of the steep incline in your lungs and the discomfort in your knees as you go back downhill.

It seems indulgent to be sat enjoying cups of tea in a comfy café, when for so long Raynor and Moth would often only be able to order pots of hot water, sneaking their own tea bags into pots, saving money for food. “We live a lot more of a minimal life than we used to,” says Raynor. “We don’t need things or stuff the way we used to. You build your life around stuff. Stuff is the output of life and it becomes the thing that holds you back. I can’t do this or that, because I have created this… We are free now, more than we have been before. So often we don’t value what we have, like sitting down for this cup of tea without giving it a thought.” During their time on the coastal path the couple lived off a small weekly sum paid from tax credits. They had nothing else. They used what they had left after solicitor fees to buy a new tent and a small amount of kit for their walk. As you read, painfully walking alongside them you witness real hardship. Coins being knocked out of their hands and bouncing down the street, a seagull wrenching a pasty from Raynor’s hungry hands and the pair camping on the path between heather and shrubs. Strangers rarely offer help or food, often physically recoiling when Raynor or Moth explained they are homeless. “As we passed people on the path, you would say hello and ask each other where you were going or where you had been,” say Raynor. “We would always get the same reaction, people saying we were lucky to have the time to walk so far. If we explained it was because we were homeless and had nowhere else to go, there would be a visible step back. There is so much preconception with homelessness, a build-up of ideas that people are homeless for horrible reasons or addiction issues. We were really surprised. There were people who had plenty that could have helped us, but didn’t. In the majority of cases the people who had nothing to offer, were the most generous.”

As they walk it is surprising how many people are rude or unkind, but like life, if you look closer there is plenty of joy and generosity in the story. One of the things I love is the kindness and generosity they give each other. Having lost everything, what that meant to them as individuals, as a couple, as parents – it could have broken their bond. There are plenty of raw moments in the book, times where Raynor finds it hard to be a mother when she has lost the protection and bubble a home brings. Moth’s illness tugs on his body as a constant reminder of how little time they may have left together. “The start was the hardest, everything was so raw and visceral,” says Raynor. “We were struggling to grasp what had happened to us, never mind coming to terms with it. The walk was much tougher than we expected, we hadn’t really understood what it meant when the guide book said we had to descend the equivalent of Everest four times. We were coming to terms with the fact we had lost everything and it felt like a bereavement, we had put 20 years of time, effort, money and everything into our home and work. At the beginning of the walk I felt like a cup filled to the brim, when there is a rise in the liquid at the top before it spills.”

The start was the hardest, everything was so raw and visceral. We were struggling to grasp what had happened to us

Of course there are plenty of joyful sections of the book, where stretches of the path bring Raynor and Moth delight: reaching Land’s End in the pouring rain, swimming at night with sleeping seagulls and the sheer beauty of the British coastline. “The bit from St Ives around to the Minack Theatre is probably my favourite bit,” says Raynor. “So beautiful, I go back to that section over and over. But there were so many bits. The cliffs on Exmouth are so spectacular and further east to Fleet Lagoon behind Chesil Beach – so soft, so tranquil. But for the beauty of it and how we were feeling at the time, it would be that bit after St Ives. I get asked a lot for my favourite, it is so tricky and often people want me to say their favourite section. The south coast is so soft and gentle and the north is wild and visceral, I am very drawn to the north and feeling the elements right on you.”

‘It will be alright’

It is difficult to talk too much about the book without giving away all the best bits, which make it such a surprising and delicious read. But one of my favourite elements of the book is the idea of coincidence verses fate, symbols and magic. Both Raynor and Moth are sceptics throughout the book, often rolling their eyes at each other as they encounter sages and prophets. I ask Raynor if she is less of a sceptic since finishing the path and seeing how things have turned out?

“I am a little more spiritual, it was all so unexpected,” she says. “I have a strong bond with the coast, I miss the sea now when I am away from it. At the end of our walk, at the end of the book, I started to realise it wasn’t coincidence anymore – there was magic to it. I would never have thought of moving here, I had barely been to Cornwall until we walked the path, but somehow we ended up here and we absolutely love it. I constantly say to my children – ‘It will be alright’ – because it will.”

The Salt Path by Raynor Winn, published by Penguin, is available now from all good bookshops.

Oxford versus Cambridge – Across the English Channel

The Channel: There and back again